DoPT: Online recording of APAR on SPARROW extended to all cadres of CSS/CSSS/CSCS 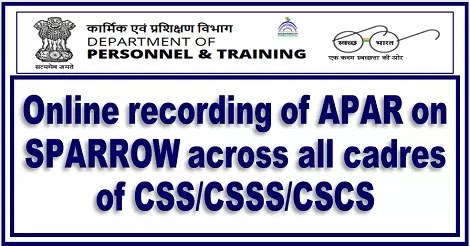 Subiect: Introduction of SPARROW across all the cadres of CSS/CSSS/CSCS.

The undersigned is directed to say that this Department is about to introduce e-HRMS. For seamless integration of all software/applications being run in DoPT, under the platform of e-HRMS.

2. Accordingly, it has been decided to extend the online recording of APAR on SPARROW to all officials/officers of CSS i.e. ASO & SO and all officials/officers of CSSS i.e. Steno Grade ‘D’ & above and CSCS (JSA/SSA) from the FY 2018-19. The Nodal Officers functioning under the present SPARROW system will be the custodian of the APARs of these officers. DoPT will supervise the overall functioning of the SPARROW system.

3. Role of various stakeholders to implement the system is outlined below:

(i) CS I Division – CS-I Division’s role will be limited to that of issuing guidelines and providing technical assistance in data creation, setting up of work flow and generation of PARs.

(iii) NIC – NlC will be required to design the SPARROW system for enabling decentralized custody of APARs of officials/officers of CSS/CSSS/CSCS in the concerned Ministry/Department. NIC will also facilitate creation of data base of the Officer Reported Upon (ORU). Reporting Officer and Reviewing Officer. They will also oversee overall execution of the SPARROW system and resolve the issues that may be faced by the Ministries/Departments from time to time.

4. The system of recording of APARs online for officials/officers of CSS/CSSS/CSCS will be applicable from the financial year 2018-19 i.e. w.e.f. 1st April, 2019. However, the exercise of writing of APARs for 2018-19 will be applicable from 1st July, 2018. In terms of Estt. Division OM No.5/5/72-Estt.(A) dated 20th May, 1972, a retiring officer can record his remarks within one month of the retirement. Thereafter, the said Reporting/Reviewing officer forfeits his/her right to record APAR. Therefore, Ministries/ Departments are advised to take necessary action with regard to capture of data and setting up of work flow with technical assistance of NIC, so that the PARs can be generated on or before 1st July, 2018 in respect of the ORU whose reporting officers/reviewing officers would be retiring on or after 30th June, 2018.

5. In pursuance of the aforesaid decision, Ministries! Departments are requested to take necessary action towards execution of SPARROW for officials/officers of CSS/CSSS/CSCS. For doing so broad guidelines are as under:

I. The Custodian will be responsible for generation and custody of APARs in respect of officials/officers of CSS/CSSS/CSCS working in the Ministry/Department concerned.

II. The Custodian will generate the APAR immediately after a reporting officer or reviewing officer is going to retire on or after 3oth June, 2018. They will in no case wait till close of the financial year. In terms of Estt. Division OM No.5/5/72-Estt.(A) dated 20th May, 1972, the retiring official/officer can record his/her remarks within one month of the retirement.

III. Similar exercise is to be carried in case a reporting officer or reviewing officer is going on transfer/demit office.

IV. APARs written on Hard copies should not be accepted by the custodian, barring a few exceptions such as the officer being on deputation to organizations where the SPARROW system is not active.

V. Prior approval from DoPT will have to be obtained, if it becomes necessary to record APAR of any officer on hard copies and that too by giving full justification and with the approval of JS-in-charge of the Ministry/ Department concerned.

VI. Since, officials/officers of CSS/CSSS/CSCS may not be familiar with the functioning of the SPARROW, orientation programmes could be organized for them in batches. This will be done by the Ministry/Department where the officials/officers are posted.

VIII. In case any official/officer faces any difficulty in log-in, writing self assessment PAR or sending PAR to reporting officer they may send their queries to DoPT SPARROW helpdesk via e-mail egs.helpdesk-dogt@gov.in. They can also contact the Helpdesk on telephone 24653220.

6. All the Ministries/Departments are requested to bring these instructions to the notice of all concerned and take necessary action as outlined in above paras.