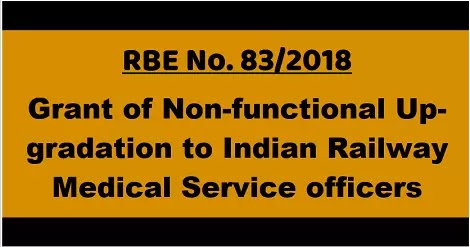 GOVERNMENT OF INDIA
MINISTRY OF RAILWAYS
(RAILWAY BOARD)
PC-VI No. 386

Attention is invited to Railway Board’s letter No. PC VI/2009/I/4/R-6/1 dated 27.11.2009 (RBE No.209/2009) circulating DOP&T’s OM No. AB. 14017/64/2008-Estt(RR) dated 24.04.2009 & 25.09.2009 for adoption in favour of Railway Officers of Organised Group `A’ Services in PB-3 and PB-4.
2. It was subsequently clarified by DOP&T vide their OM No. AB.14017/39/2009-Estt.(RR) dated 02.04.2012 that the benefit of NFU to Organised Group `A’ Services shall not be applicable to the officers in those Organised Services where FCS and DACP Schemes are already operating and where officers are already separately covered by their own in-situ Progression Schemes. However, Hon’ble Delhi High Court in WP (C) No. 4067/2014 and WP (C) No. 4073/2014 vide orders dated 13.10.2014 quashed the DOP&T’s OM dated 02.04.2012. Since the said judgment of Hon’ble High Court attained finality as Hon’ble Supreme Court dismissed the SLP and Review in the case, DOP&T decided to declare their OM dated 02.04.2012 as non-est, as conveyed vide their OM No.CS-14017/1/2018-Estt.(RR)(Pt.l) dated 25.04.2018.
3. There has been a demand of IRMS officers also for extension of the benefits of NFU Scheme and the issue has been the subject matter of litigation. Hon’ble Central Administrative Medical Tribunal vide their orders dated 28.09.2017 in O.A.No.3290/2017 (Indian Railway Medical Services Association & Anr vs DOP&T & Anr) allowed the relief in terms of the judgment of Hon’ble Delhi High Court in W.P.(C ) No. 4067/2014. The matter was accordingly referred to DOP&T.
4. DOP&T have considered the issue in consultation with Department of Expenditure and conveyed their no-objection to the Ministry of Railways to extend NFU benefits to IRMS doctors. Accordingly, Ministry of Railways have decided to grant the benefit of Non-Functional Upgradation (NFU) Scheme as applicable to Organized Group `A’ services of Railways to IRMS Officers as per the detailed terms and conditions as have been in vogue from time to time after introduction of the scheme. Accordingly, grant of higher scale / benefits under the scheme would be admissible w.e.f. 1.1.2006, where due and admissible, as provided in the original instructions under reference.
(S. Balachandra Iyer)
Executive Director/Pay Commission-II
Railway Board.
Source: Click here to view/download the PDF
[http://www.indianrailways.gov.in/railwayboard/uploads/directorate/pay_comm/PC6/2018/RBE_83_2018.pdf]
Read also :  Allowances Committees will submit its report in F.Y. 2017-18

Ministry of Railways 221 RAILWAY BOARD 422 NFU 3 Uncategorized 2198
Newer Post
Approval for Contractual engagement of retired railway staff on “Consultant-cum- Coach” basis for preservation of Railway Heritage
Older Post
Reservation in Promotion : No ban, carry out promotions in accordance with the directions of the Hon’ble Supreme Court based on existing seniority/select lists – DoP&T