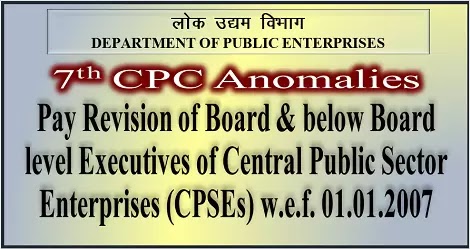 Subject: Pay Revision of Board & below Board level Executives of Central Public Sector Enterprises (CPSEs) w.e.f. 01.01.2007 — Government decision on the recommendations of the Anomalies Committee- regarding.


The Department of Public Enterprise (DPE) vide O.M. No.2(70)/2008-DPE (WC)-GL-XVI/08 dated 26.11.2008 established an Anomalies Committee consisting of the Secretaries or the Department of Public Enterprises, Department of Expenditure and Department of Personnel & Training. The Anomalies Committee was constituted to address issues/problems arising while implementing the recommendations of 2nd Pay Revision Committee (PRC) for the CPSEs by the Government.
2. The Anomalies Committee gave its recommendations on various issues referred to it by the administrative Ministries/Departments regarding the 2nd PRC related guidelines for its consideration. Consequently, DPE issued the following guidelines vide its OMs dated 26.10.2010, 08.06.2009, 24.09.2010, 0106.2011, 03.06.2011 and 29.06.2012 for implementing the anomalies committee’s decisions.
3. Now for the sake of convenience of all the stakeholders, the said DPE OMs have been collated as under:
(i) Deputation or the Government Officers in CPSEs
a) The Government officers already on deputation with the CPSEs as on 26.11.2008 (the date of issue of O.M. by the DPE regarding the revision of scale of pay of the executives and non-unionised supervisors of CPSEs) will continue to avail of the option already available and exercised by them till the end of their deputation tenure. The extension, if any given after 26.11.2008 will not qualify for this dispensation.
b) The Board level executives who have been selected through PESB mechanism in IDA scales, and appointed on deputation basis, by ACC/Competent Authority prior to 26.11.2008 will continue to get the same scales with all its associated benefits till the end of their tenure.
c) It may be emphasized that the pay revision of the executives is a total package and the scales, perks and allowances should not be mixed. Accordingly the executives getting the CDA pay scales will continue to get benefits, perks and allowances applicable to CDA scales and executives who are getting IDA pay scales will get perks and allowances applicable to IDA scales.
d) The above decisions are enabling provisions. All the conditions indicated in DPE O.Ms dated 26.11.2008, 09.02.2009 and will be applicable mutatis mutandis to such executives also.
(ii) Self-Lease
(a) Every CPSE must have a Rent Assessment Committee (RAC), which would assess the market tent for categories of executives and non-unionised supervisors, entitled for lease/self-lease accommodation and also the maximum ceiling of reimbursement depending upon the company’s capacity to pay. The RAC may include Members from Finance, HR., Civil Engineering, Law etc. as deemed appropriate.
(b) The RAC will also decide on rent recovery, for which DPE guidelines as applicable to Board level Executives (10% of Basic pay) will be kept in view.
(c) For purposes of CTC, 30% of Basic Pay is required to be considered on housing as per Para 8 of DPE O.M. dated 26.11.2008. This is not meant to a ceiling and tberefore, this should not be treated as the maximum limit for a leased accommodation.
(d) The Board of Directors of CPSEs must ensure that self-leased accommodation does not become an additional source of income to the employee. The precautions as indicated in DPE O.Ms dated 20.05.2009 and will also be kept in view.
(iii) Expenditure on Hospitals, Colleges, Schools. Clubs etc.
The percentage towards expenditure on Hospitals, Colleges- Schools, Clubs etc. should be as close to actual and should be assessed preferably every financial year.
(iv) Encashment of Leave
(a) DPE O.M. dated 05.08.2005 provides for a maximum ceiling of Earned Leave that can be accumulated. CPSCs are not permitted to encash leave beyond 300 days at the time or retirement of an employee of CPSE. The employees are not permitted to accumulate more than 300 days as specified under DFE guidelines.
(b) Casual Leave must not encashed at all and shall lapse at the end of the calendar year.
(c) The component of leave encashment during service i.e. the expenditure on leave encashment, will not be treated Perks and Allowance. It will not however, be treated as pay and accordingly not qualify for any other benefit like HRA. etc.
(d) Leave encashment on Superannuation will not be part of 30% ceiling of Basic Pay and DA for superannuation benefits.
(v) Non-practicing Allowance(NPA)
NPA will not be considered as pay for the purpose of calculating other benefits.
(vi) Keeping various allowances/benefits/ perks including project allowance, higher conveyance allowance to persons with disabilities, etc. outside the 50% allowances ( i.e. Of Basic Pay).
No other allowances/benetit/perks will be kept outside the prescribed 50% ceiling except the four which have been mentioned in the DPE O.M dated 26.11.2008.
(vii) Procedure of pay fixation in some past cases of pay of Board Level Executives
a) Since the percentage based increment during the periodicity of 1997 pay revision was granted with the approval of the Competent Authority to specific CPSEs, would not be proper to consider notional increment and stagnation increment based on fixed elements.
b) Stagnation increment can only be granted after reaching the maximum of scalc of pay. once after two years and a maximum of three only. This mechanism was applicable upto 31.12.2006.
(viii) Bunching of Increment.
The benefit of bunching of increments be extended to board executives of CPSEs also, where applicable, as per para (iii) of DPE 0M. dated 26.11.2008.
4. Any decision as mentioned above, if result in financial burden on the concerned  CPSE, it may be requested to keep in mind the provisions relating to affordability, no budgetary support from Government, internal generation of resources, sustainability and capacity to pay by
the concerned CPSE.
5. The effective date, if not specifically mentioned above would be dealt per the DPE OMs dated 26.11.2008, 09.02.2009 and 02.04.2009.
6. All administrative Ministries/Departments are requested to bring these consolidated DPE  guidelines to the notice of CPSEs under their administrative control for strict compliance.
sd/-
(A K Khurana)
Director
Source:  click to view/download
[https://dpe.gov.in/sites/default/files/Anomalies_Committee_Consolidated_10_July_2018.pdf]
Read also :  Govt is not ready to discuss Minimum Pay, Increment, Anomaly due to index rationalization, Date of effect of Allowances, Minimum Pension etc. in N.A.C - DoPT