CPAO Order: Procedure for extending the benefits of Old GPF / Pension Scheme to casual workers covered under the Scheme of 1993 and regularized on or after 01.01.2004 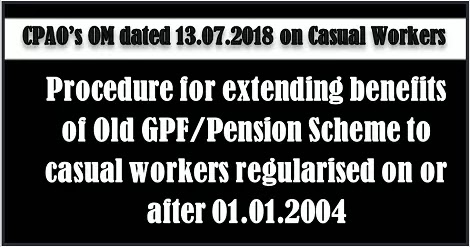 Subject :- Procedure for extending the benefits of Old GPF / Pension Scheme to those casual workers covered under the Scheme of 1993 and regularized on or after 01.01.2004.

It has been observed that the pension cases of casual labour who were regularized on or after 01.01.2004 and eligible for old GPF/Pension Scheme vide DOPT OM No.49014/2/2014-Estt(C) dated 28.07.2016 have not been processed by the concerned Ministries/Departments. In order to avoid the hardship to the pensioners all the Ministries/Departments/PAOs have been requested to finalise the pension cases of the pensioners after following the procedure below:
1) Deptt. may issue the order that the old GPF Scheme/ Pension Scheme is applicable to the concerned official.
2) CPAO may be requested through concerned Pay & Accounts Office to stop Provisional Pension after cancellation of PPO, if issued.
3) NSDL may he requested by the concerned PAO to deposit the NPS subscription, Govt. Contribution plus interest thereon into the Govt. Account through ERM of NSDL.
4) On receipt of the amount it may be classified by the concerned PAO as below:
5) GPF and Pension case of the concerned official may be processed as per the GPF Rules and CCS (Pension) Rules, 1972 after adjusting the Provisional Pension paid to the pensioner, if paid.
This issues with the approval of the Chief Controller (Pensions).
(Praful Dabral)
Sr. Accounts Officer (IT & Tech)
Source: Click here for Signed Copy
Read also :  7th CPC: केन्द्रीय सिविल सेवा (संशोधित वेतन) नियमावली, 2016 के नियम 10 के तहत अगली वेतनवृद्धि की तारीख के संबंध में वित्त मंत्रालय का स्पष्टीकरण