DPE OM dated 23.07.2018: Standard Terms and Conditions for 2017 IDA pay scales in respect of Board level executives of CPSEs

Subject :- Standard Terms and Conditions for 2017 IDA pay scales in respect of Board level executives of CPSEs – reg.

Sir/Madam,
I am directed to convey the sanction of the President to the appointment of Shri/Smt./Kum.___________________ as _________________ in
______________________ w.e.f.__________________ on the following terms and conditions:-
1.1 Period: The period of his/her appointment will be for a period of ………..
years w.e.f. _____________ (date of appointment) in the first instance or till
the date of superannuation or until further orders, whichever event occurs earlier and
in accordance with the provisions of the Companies Act, 2013 as amended from
time to time. The appointment may, however, be terminated even during this period
by either side on 3 months’ notice or on payment of three months salary in lieu
thereof.
1.2  After the expiry of the first year, the performance of Shri/Smt./Kum_____________ will be reviewed to enable the Government to
take a view regarding continuance or otherwise for the balance period of his/her
tenure.
1.3  Headquarters: His/her headquarters will be at____________ where the registered office/corporate office/headquarters of the CPSE is located.
He/She will be liable to serve in any part of the country at the discretion of the CPSE.
1.4  Pay: Shri/Smt./Kum. _______________ will draw a basic pay of Rs.__________________ per month in the scale of Rs.____________(2017 pay
scale as per DPE OM dated 03.08.2017) from the date of assumption of Office (w.e.f. date of
pay revision in case appointed earlier than that).
Read also :  Discontinuation of execution of bond for direct recruit candidates as provided under Appendix 21 of P&T Manual IV
1.5 Dearness Allowance: He/She would be paid DA in accordance with the new IDA scheme as spelt out in the DPE’s OM dated 03.08.2017.
1.6  Annual Increment: He/She will be eligible to draw his/her annual increment @ 3% of basic pay on the anniversary date of his/her appointment in the
scale referred to in para 1.4 above and further increments on the same date in subsequent
years until the maximum of pay scale in reached. After reaching the maximum of
the scale, one stagnation increment equal to the rate of last increment drawn will be
granted after completion of every two year period from the date he/she reaches the
maximum of his/her pay scale provided he/she gets a performance rating of “Good” or
above. He/She will be granted a maximum of three such stagnation increments.
1.7 House Rent Allowance: He/She will be entitled to HRA as per the rates indicated in OMs dated 03.08.2017 & 04.08.2017.
1.8.  Residential accommodation and recovery of rent for the accommodation so provided.
1.8.1 Company’s own accommodation: Wherever the CPSE has built residential flats in the industrial township or purchased residential flats in the
cities, arrangements would be made by the CPSE to provide a suitable residential accommodation
to him/her.
1.8.2 Leased accommodation: If the CPSE is not able to provide residential accommodation either in township or out of the residential flats, purchased
by it in the Headquarters, suitable accommodation could be arranged by the CPSE by
taking the premises on lease basis at their headquarters. The Board of Directors may
decide the size, type and locality of such accommodations as per DPE OMs dated
05.06.2003, 03.08.2017 and 04.08.2017.
1.8.3 Self-lease: If he/she owns a house at the place of his posting
(Headquarters) and is desirous of taking his/her own house on self-lease basis for his/her
residential purposes, the CPSE may permit him/her to do so provided he/she executes a
leasedeed in favour of the CPSE. The Board of Directors may decide the
size, type and locality of such accommodations as per DPE OMs dated 05.06.2003, 03.08.2017
and 04.08.2017.
1.8.4 Repair/maintenance of leased accommodation: The responsibility for repair and maintenance of leased accommodation is that of the lessor. Lease rent
will be allowed only for12 months in a year and no additional amount will be
provided towards repair/maintenance of leased accommodation.
1.8.5 Existing lease deeds: The lease agreement signed by the CPSE in respect of the accommodation taken on lease basis for him/her, if any, prior to
03.08.2017 would not be re-opened during the pendency of the lease period. The lease money,
in other words, should not be hiked till the expiry of lease period. This proviso
would be applicable even if he/she had been permitted to take his/her own house on
self-lease basis.
Read also :  7th CPC : Fixation of Pension of Commissioned Officers of Army Medical Corps/Army Dental Corps/Remount & Veterinary Corps retired during Jan 2016 to June 2017.

Delhi, Mumbai, Kolkata, Chennai                            1000KM/PM
Bangaluru, Hyderabad
All the other cities                                                     750KM/PM
Monthly recovery amount (AC/Non AC) for private use/non-duty journeys would be Rs 2000/- PM.
1.11 Leave: He/She will remain subject to the Leave Rules of the CPSE.
1.12 Club Membership: He/She will be allowed the Corporate Club Membership (upto maximum of two clubs), co-terminus with his/her tenure.
1.13 Other Allowances/Perks:  The Board of Directors will decide on the Allowances and Perks subject to a ceiling of 35% of his/her basic pay as
indicated in OMs dated 03.08.2017, 04.08.2017 & 07.09.2017.
1.14 Performance Related Payment(PRP): He/She shall be eligible for approved
PRP as per OM dated 03.08.2017.
Read also :  7th CPC Minimum Pay - Rs. 19670 and uniform multiplication factor - 2.81 at all levels - Notes submitted by JCM
1.15 Superannuation Benefits: He/She shall be eligible for superannuation benefits based on approved schemes as per OM dated 03.08.2017.
1.16 Conduct, Discipline & Appeal Rules:
1.16.1 The Conduct, Discipline and Appeal Rules framed by the CPSE in
respect of their below Board level Executives would also mutatis mutandis apply to
him/her with the modification that the Disciplinary Authority in his/her case would be
the President of India.
1.16.2 The Government also reserves the right not to accept his/her
resignation, if the circumstances so warrant i.e. the disciplinary proceedings are pending or a
decision has been taken by the Competent Authority to issue a charge sheet to
him/her.
1.17 Restriction on Joining Private Commercial Undertakings after
Retirement/Resignation

1.17.1 Shri/Smt./Kum. _______________ after retirement/resignation from the
service of this CPSE shall not accept any appointment or post, whether, advisory or administrative, in any firm or company whether Indian or foreign, with
which the CPSE has or had business relations, within one year from the date of his retirement/resignation, without prior approval of the Government.
1.17.2 In order to secure compliance of these restrictions, CPSE shall secure a
bond from him/her at the time of their employment/retirement/resignation in CPSE
for an appropriate sum of money payable by him/her as damages for any violation of
these restrictions in terms of DPE OM No.2(22)/99-GM dated 8th August, 2012.
1.18 Lien: In case, he/she was holding a below board level post before his/her appointment to the board level post in a CPSE, he/she will retain lien on
their below board level post, if applicable, as per the extant guidelines of DPE/CPSE
concerned.
2. In respect of any other item, concerning him/her which is not covered in preceding paras, he/she will be governed by the relevant Rules/instructions
of the CPSE concerned/Government.
3.  This issues with the concurrence of the Finance Division, Ministry of …………, vide their U.O. No. __________________ dated ______________ .
Yours faithfully
(                       ) 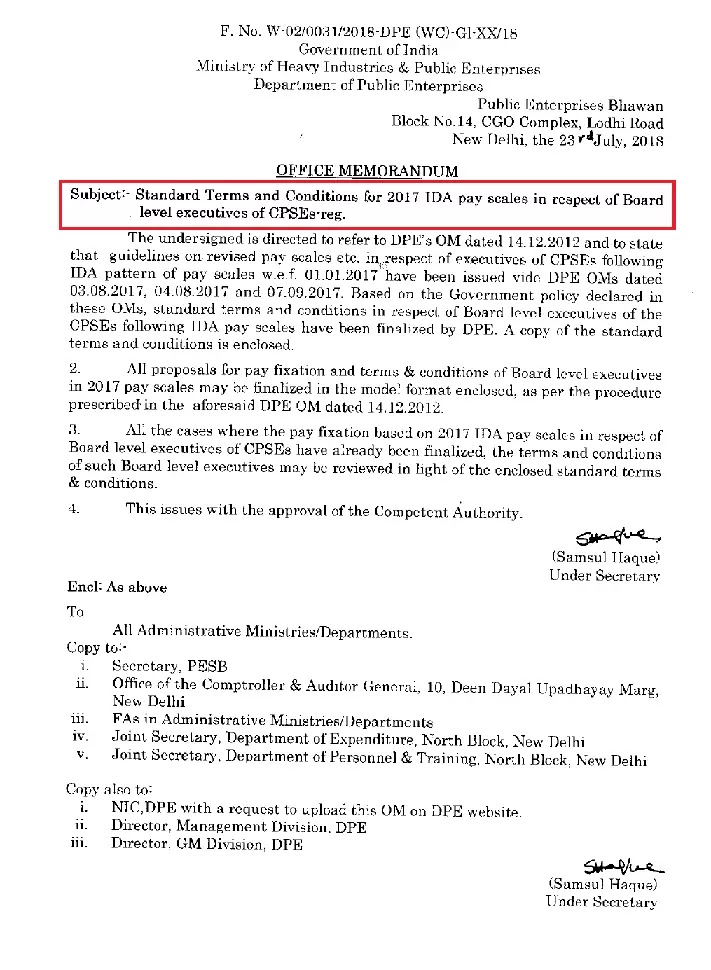