House Building Advance – enhancement of amount equivalent to the difference between the previously sanctioned amount and the new eligible loan amount sanctioned on or after 01.01.2016 but before 09.11.2017 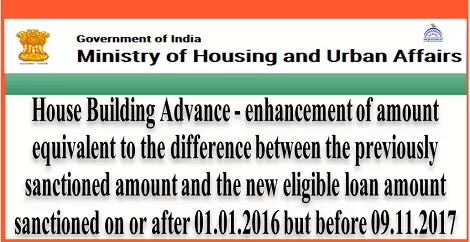 The undersigned is directed to invite attention to this Ministry’s OM No. I-17011/11(4)/2016-H.Ill dated 09.11.2017 on the above-mentioned subject and to say that it has been decided in consultation with Ministry of Finance to make the aforesaid orders applicable with effect from 1st January ,2016. Accordingly, it has been decided that an enhancement of House Building Advance, if applied for, would be granted to government employee for an amount equivalent to the difference between the previously sanctioned amount and the new eligible amount determined on the basis of basic pay as per 7th CPC, in past cases, where HBA was sanctioned on or after 01.01.2016 but before 09.11.2017 subject to complying following conditions:

Read also:  गृह निर्माण अग्रिम नियम (एचबीए) — 2017: कार्यालय ज्ञापन
Read also :  7th CPC : Special Level Crossing (LC) Gate Allowance for Track Maintainer in Railway
a) The Government employee should not have drawn the entire amount of HBA sanctioned under earlier orders and/ or where construction is not completed/full cost towards acquisition of house! flat is yet to be paid.
b) There will be no deviation from the approved plan of construction on the basis of which the original sanction of House Building Advance was accorded. The revised cost of the original plan can, however, be considered for determining the additional amount, subject to the prescribed maximum limits.
c) Supplementary Mortgage Deed. Personal Bond and Sureties will be drawn and executed at the expense of the loanee.
d) The actual entitlement will be restricted to the repaying capacity computed on the basis of the formula laid down in this Ministry’s OM No I-1701/1/11(4)/2016-H.III dated 09.11.2017. It should be ensured that the entire amount of advance with interest is recovered before retirement of the Government servant

Read also: 7th CPC HBA Orders: Migration of Existing Home Loans from Banks/other Financial Institutions
Read also :  CGDA Order : Bunching of stages of pay in pre-7th CPC pay scales consequent upon fixation of pay in the revised pay scales based on 7th CPC - Regarding.
e) Rate of interest: The rate of interest will be at 8.50% from the financial year 2017-18 onwards. This will be reviewed every three years to be notified in consultation with Ministry of Finance. However, the new rate of interest would be chargeable only on collective amount that would remain outstanding on grant of enhancement of HBA. i.e., the unpaid portion of previously sanctioned HBA plus the enhancement so granted. Thus. the amount of HBA that has already been re-paid on old rates will not attract the fresh interest charges.
2. However, the existing limit of maximum admissible amount of Rs. 25 lakhs for the purpose of construction! purchase of new house/ flat and Rs. 10 lakhs for expansion of existing house/ flat would remain unchanged. In other words, the sum total of previously, sanctioned House Building Advance and the enhancement granted under these orders cannot exceed the aforesaid limits. In any case, not more than one enhancement is admissible to a Government employee.
3. The applications for enhanced House Building Advance should be submitted within six months from the date of issue of this order.
Read also: House Building Advance Rules (HBA) – 2017 – MoHUA Office Memorandum

4. Ministries/ Departments with branch offices in the far-flung areas are be advised to give wider publicity to these orders through modern communication means so that there is no occasion for any representation for extending the time limit of six months on the grounds of late receipt of these orders.
5. This issues in supersession of all the earlier orders on the subject.
Sd/-
(Shailendra Vikra Singh)
Director (IFD) 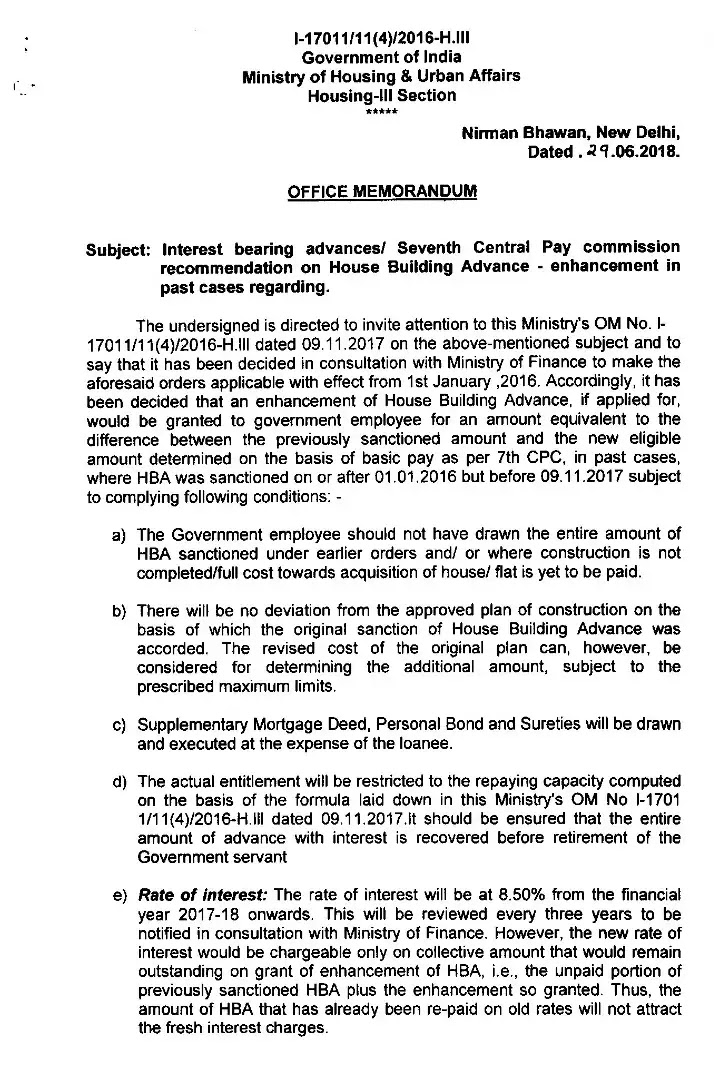 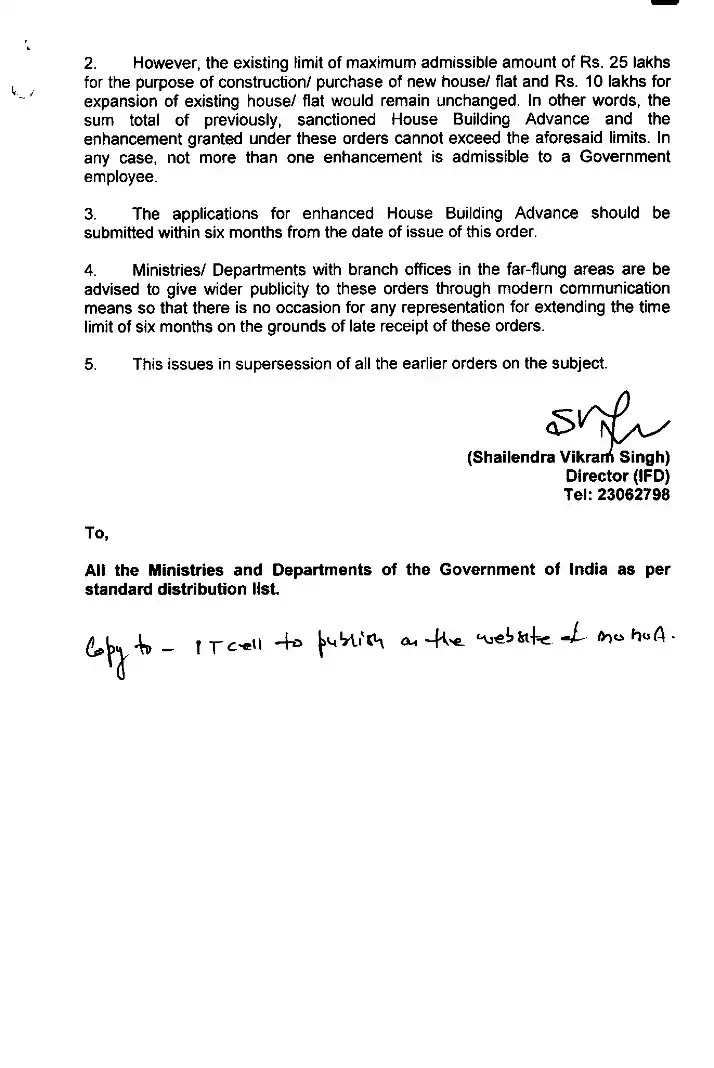