Implementation of reservation in promotion for employees – Rajyasabha Q&A

Will the PRIME MINISTER be pleased to state:
(a) whether it is a fact that Government has asked all its departments and the State Governments to implement reservation in promotion for employees belonging to Scheduled Castes and Scheduled Tribes categories;

(c) whether it is also a fact that the move comes following a recent verdict by the Supreme Court in this regard; and
Read also :  Revision of Pension cases under 7th CPC : Common mistakes by PAOs in processing

(d) if so, the details thereof?

“Heard learned counsel for the parties, Learned ASG has referred to order dated 17.05.2018 in SLP(C) No.30621/2011. It is made clear that the Union of India is not debarred from making promotions in accordance with law, subject to further orders, pending further consideration of the matter. Tag to SLP (C) No.30621 of 2011.” 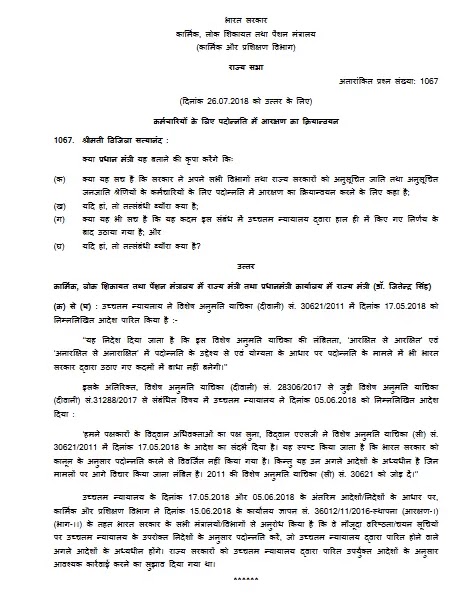 Rajya Sabha 26 RESERVATION 27 Reservation in Promotion 17 Uncategorized 2198
Newer Post
Whether the Govt. proposes to extend the time-limit of reservation for Schedule Tribes – Rajyasabha Question
Older Post
NPS: Government is not in a position to revert back to old pension scheme – Reply in Rajya Sabha