Minutes of the Meeting held on 18.06.2018 with staff side of Defence Civilian Employees under provision of ‘Additional Mechanism’

Minutes of the Meeting held on 18.06.2018 with staff side of Defence Civilian Employees under provision of ‘Additional Mechanism’
MOST IMMEDIATE
JCM MATTER
Government of India
Ministry of Defence
, Department of Defence
D(JCM)

Subject :- ‘Minutes’ of the Meeting held 18.06.2018 under the Chairmanship of JS(E) to discuss the issues related to his wing as raised by the Staff Side of Defence Civilian Employees/Workers under provision of ‘Additional Mechanism’. 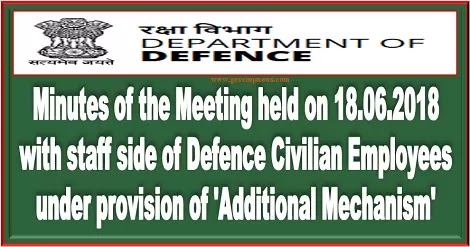 A copy of the Minutes of the Meeting held under the Chairmanship of JS (E) on 18.06.2018 on the above subject , is available in MoD’s website under “Employees Corner”, sub-section “JCM”.
2. It is requested that the Minutes of the Meeting may be gone through, necessary action may be taken and the Action Taken Report (ATR)/views/comments on point(s) concerned may be forwarded to D(JCM) Section immediately with the approval of the concerned JS/HOD/HOO.
3. It is further requested that in those cases where action is/are p[ending and not yet finalized, the progress achieved so far may be furnished from time to time to D(JCM) Section till finalization of the case.
4. Hindi version will follow .
(A. Saha)
Under Secretary to the Govt. of India
Telefax : 2301 1260

i) MoD/D(OL) : It is requested that Hindi version of the Minutes of the above Meeting dated 18.06.2018 may be made and forwarded to D(JCM) Section urgently so that the same can be uploaded in the MoD’s website bilingually.

ii) MoD/D(IT) Section : It is requested that this may be uploaded in the Ministry’s website under “Employees Corner”, sub-section “JCM” urgently to facilitate the participants to have an easy access to the information for the meeting.
Copy also for information to :-
PPS to JS (E)
Annexure
LIST OF PARTICIPANTS IN THE MEETING HELD ON 18.06.2018 UNDER THE CHAIRMANSHIP OF JS(E) (UNDER PROVISION OF ‘ADDITIONAL MECHANISM’)
1. Shri M. Subbarayan, Joint Secretary (Establishment) – In Chair

1. Revision of the Inter-grade Ratio of Artisan Staff of the MoD at par with the Railways

Gist of Discussion: It was intimated that the proposal was examined in D(Civ-1) Section in consultation with various Defence Establishments who were not in favour of revision of the existing inter-grade ratio since the same would lead to a distorted pyramidal structure in the hierarchy leading to shortage in some levels and stagnation at other levels.
Decision: The Staff Side would submit a revised proposal after consultations so that the same could be examined by the Ministry.

2. Delay in issuing of Government orders on revision of various allowances on the basis of the 7th CPC recommendations

Gist of Discussion : The information regarding financial implications as sought by DoP&Twas forwarded to it on 25.04.2018 .

Decision: Further orders/communication from DoP&T may be awaited .
(b) Risk allowance to left out units/categories/operations

Gist of Discussion: It was intimated that Lower Formations/Admn. Divisions have been requested on 17.05.2018 to send the proposal indicating the number and category of employees to be included fo r grant of Risk Allowance. The requisite information is awaited.
Decision : Reminder may be issued by D(Civ-11) to the concerned requesting to provide the requisite information. The issue of inclusion of additional operations can be taken up separately.
(c) Risk Allowance in Risk & Hardship Matrix

Gist of Discussion: It was informed that detailed note/proposal is still awaited from the Staff Side as per the decision taken in the Steering Committee Meeting dated 10.10.2017. The Staff Side intimated that the proposal has already been submitted.
Decision: Staff Side may furnish a copy of the proposal to D{Civ-11) so that the matter may be examined.
(d) Revision of Night Duty Allowance
Gist of Discussion: It was intimated that the proposal is under consideration of DOP&T.
Decision: Further orders/communication from DoP&T may be awaited.

Gist of Discussion: It was intimated that the proposal is pending with DOP&T. Discussions have been held with the concerned in DOP&T and a self-conta ined note has been submitted as desired by them.
Decision: Further orders/communication from DoP&T may be awaited .

Gist of Discussion: It was intimated that this recommendation has been agreed in-principle subject to consultation with DOPT and Department of Expenditure.
Decision:Any further details on the subject can be obtained from D(CMU) .

5. Delay in providing the office accommodation to the staff side of the Departmental Council (JCM) at Sena Bhawan

Gist of Discussion : It was stated that a well furnished office accommodation was provided to the Staff Side. Few years back it was taken back with a promise to return it after renovation work but so far, it was not handed over to the Staff Side.
Decision: D(Genl.II) to check the factual position from file records and do the needful.

6. Issue of Instructions to all the Directorates to hold JCM III Level Meetings

Gist of Discussion: It was intimated that JCM III Level meetings in various Directorates are not being held regular ly due to which issues/grievances of the employees are remaining unsettled.
Decision: Directions to be issued by D(JCM) to all concerned to follow the guide lines regarding conducting of JCM Meetings.

7. Delay in finalizing the outstanding issue of non-applicability of CCS (RSA) Rules to those categories of employees who are falling under the definition “Workmen”

Gist of Discussion:It was mentioned that the matter is pending for advice from LA (Def).

Decision : Matter to be taken up with LA(Def) by D(JCM) for an early advice.

8. Grant of Trade Union Rights to the Chargeman and Office Superintendent categories

Gist of Discussion: It was informed that Chargemen and Office Superintendents are not allowed under the ‘Rules for Recognition of Workers employed in the MoD Installations and the Federations of such Unions, 1995’ as they are Group ‘B’ posts and carry supervisory powers.
Decision: Staff Side would submit necessary documents along with justifications to examine the issue further.

9. Progress in the one-time relaxation of LTC-80 cases

Gist of Discussion: All the Admin. Divisions/Lower formations have been intimated on 15.11.2017 that the individual cases need to be examined in accordance with DOP&T’s communication dated 03.07.2017. The concerned administrative wing in MoD will take up the deserving cases directly with DOP&T and they need not be referred to D(Civ).
Decision: The instructions dated 15.11.2017 may again be forwarded by D(Civ) to all the Administrative Divisions in MoD.

10. Issue of general instructions for holding of DPCs as per the latest Judgment of Hon’ble Supreme Court dated 17.05.2018

11. One time relaxation may be considered for granting compassionate appointment to all the pending cases

Gist of Discussion: The request from staff side is that (i) 5% vacancies may be calculated as a one-time measure; (ii) Group ‘A’ & ‘B’ vacancies shall also be taken into account while calculating the Group ‘C’ vacanc ies ‘to be earmarked for compassionate appointments; and
(iii) wa rds of deceased armed forces personnel may not be accommodated in the
compassionate vacancies earmarked for civilians.
Decision : The first two requests are not in consonance with the existing policy of Government on compassionate appointment s. As regards the third request, it was informed that the data collected from Army, Navy and Air Force for the years 2014 and 2015 suggest that wards of deceased armed forces personnel constituted only a minuscule 1.0-1.5 % of the total compassionate appointments made. These matters may not be pursued further .

Gist of Discussion: Staff side stated that civilians posted in these establishments are not covered under Army/Navy/Air Force Act . Hence, 1972 letter should not be extended to them .

Decision: As the issue needs to be examined in consultation with the various stakeholders ,the Staff Side may submit detailed demands with justifications.

13. Providing accommodation for the Federations/CORA in New Delhi

Gist of Discussion: It was mentioned that the servant quarters attached with JCM Bungalow in Lodhi Estate which was used as storage space by the office bearers Federations/CORA has since been locked.
Decision : The issue regarding opening of servant quarters may be taken up by D(JCM) with 0/o Chief Administrative Officer (CAO) .

Gist of Discussion: The Rules for Recognition of Unions of Workers employed in the MoD were made long time ago in the year 1995 and needs to be reviewed.
Decision : The Staff Side may submit their specific proposals which can be examined in consultation with all stakeholders .

15. Settlement of all cadre review proposals of Defence civilian employees

Gist of Discussion: Staff side stated that cadre reviews are not being carried out periodically and requested that the proposals be discussed with them .
Decision: Instructions will be issued to all concerned by D(Civ-1) to expedite the Cadre Review proposals and also to submit the data regarding cadre review.

16. Regularization of casual service for the employees who have served as Casual employees and subsequently regularized

Gist of Discussion: The request was that the services rendered as casual laborer before regularization in Ordnance factories may be taken into consideration for the purpose of extending the benefits under MACP scheme.
Decision : The issue pertains to DDP and reference in this respect has not yet been received in D(Civ-II).

17. Denial of medical facilities to the Defence civilians posted in remote areas

Gist of Discussion : It was stated that subsequent to issue of Ministry of Health & Family Welfare’s O.M. dated 03.06.2015 extending CS(MA) Rules, 1944 to the remote areas, appointment of AMAs has not been done,thus denying benefits to employees.
Decision: Instructions for appointment of AMAs particularly in remote areas would be reiterated by D(Civ-II).

18. Consideration of liabilities of the deceased employee for calculating the merit points for compassionate appointment

Gist of Discussion: This parameter was considered during the recent revision of 100-Point weightage system but the same was not included because of various considerations like reducing the number of parameters and likely scope for misuse etc.
Decision : This can be considered for discussion during the next revision.

19. Reducing the channels for considering the granting of recognition to Unions

20. Forwarding of Action Taken Reports/Updates on the points raised in JCM Meetings to all the recognized Federations/Confederation

Gist of Discussion: The staff side informed that many a time they were not aware of the action taken on the points raised by them in JCM meetings .
Decision : Copies of communications forwarded by D(JCM) to the concerned Directorates/ Admn. Divisions will be endorsed to the Federations.The Dtes/ Admn. Divisions will also be requested to inform the action ta ken directly to the staff side under intimation to D(JCM).

21. All the cadre controlling authorities should upload the current position of cadre review proposals on MoD website

22. All the issues related to D(JCM), D(Apptt.), D(Lab),D(Civ-I) & D(Civ-II) raised by BPMS in earlier Departmental Council Meetings should be expedited

Decision: All relevant issues have already been discussed in the meeting.
III. The following miscellaneous issues also came up for discussion in the meeting:
(a) The issue regarding classification of cities for grant of HRA was taken up. It was clarified that individual cases are processed by the concerned wings.

(b) The issue regarding nomination of a designated Nodal Officer for JCM related matter in DDP was discussed. It was decided that DDP would be requested to explore the feasibility of appointment of a nodal officer.

(c) The issue regarding issue of additional DAC passes to JCM members may be taken up directly with the Chief Security Officer, MoD.

(d) The issue regarding provision of office space in Delhi Cantt area may be taken up with MES authorities through JS (Works).
IV The meeting ended with the vote of thanks to the Chair
Source: Click here to view/download the PDF
[https://mod.gov.in/dod/sites/default/files/250618mintues.pdf]
Read also :  CPSE: Revised DA to Board level/below Board level executives and non-unionized supervisors following IDA scales of pay in Central Public Sector Enterprises (CPSEs) on 1987 and 1992 basis