NPS: Government is not in a position to revert back to old pension scheme – Reply in Rajya Sabha

Rashmi Prasad 0 July 28, 2018 6:26 pm
NPS: Government is not in a position to revert back to old pension scheme – Reply in Rajya Sabha 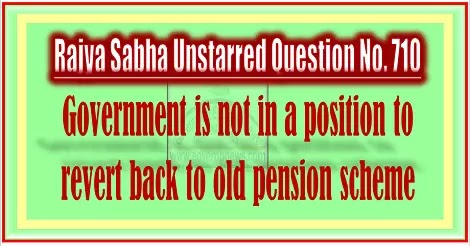 GOVERNMENT OF INDIA
MINISTRY OF FINANCE
DEPARTMENT OF FINANCIAL SERVICES

(a) whether the attention of Government is drawn to the matter of Contributory Pension Scheme and problems being faced by the employees;

(c) whether a number of requests from State Governments and Government employees have been received by Government to withdraw the CPS System, the status of such requests; and

(d) whether Government is planning to resolve the matter and abolish the CPS System in view of the problems being faced by the employees?

The Minister of State in the Ministry of Finance

(a) to (d) Yes Sir. Representations have been received from various Associations of Government Employees on the problems being faced and the demand to withdraw the National Pension System (NPS). The 7th Central Pay Commission (CPC) also in its report examined the issues related to NPS and made recommendations for addressing these issues. Pursuant thereto, it was decided to constitute a Committee of Secretaries to suggest measures for streamlining NPS. The Committee has submitted its report. Due to rising and unsustainable pension bill and keeping in view of fiscal imperatives, it is not possible for the government to revert back to old pension scheme.