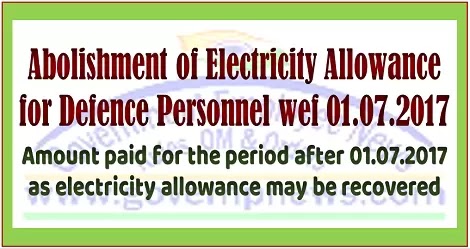 
Please find enclosed HQrs letter No.18190/AT-X/Comments(PC)Nol.lll dated 28/06/2018 under which it is intimated that Free Electricity Allowance for Defence Personnel has been Abolished vide MoF (Department of Expenditure) Resolution No.11-1/2016-IC dated 06 July 2017.
Further it is also intimated that said allowance has been abolished with effect from 01/07/2017. However, amount paid for the period after 01/07/2017 as electricity allowance may be recovered from the effected Defence Personnel.
In view of above, it is advised to take necessary step to recover the amount and also forward the action taken report to this office for onward transmission to HQrs office.
Encl.- a/a
Sr.Account Officer (E)
Read also :  Govt is not ready to discuss Minimum Pay, Increment, Anomaly due to index rationalization, Date of effect of Allowances, Minimum Pension etc. in N.A.C - DoPT

Office of the Controller General of Defence Accounts

To
All PCsDA/CsDA
PCDA (cc) Lucknow

In continuation to this HQrs letter no. quoted above, a copy of MoD letter no. 9(1)/2018/D(W-II) dated 19th June 2018 on the above subject, which is self explanatory, is forwarded herewith for information and taking necessary action.
Jt. CGDA (P&W) has seen
Encl: As above
Sr. ACGDA (AT-I)

3. The order withdraw all the powers delegated to Station Commander level or any other authority for fixing ceiling of free electricity. This order supersede all the orders regarding free electricity allowance for defence personnel.
4 This issues with the concurrence of Ministry or Defence (Finance) vide their U.O No 211/Fin/W-III dated 18.06.2018.
Sd/-
(Vishnu Dutta Jha)
Secretary to the Government of India
Source: Click here to view/download the PDF
[http://pcdacc.gov.in/download/circularsnew/abolishment_of_allowance-electric.pdf]
Read also :  7CPC: Revision of Kilometerage rates and other allowances of Running Staff - Railway Board Order dated 31.01.2019