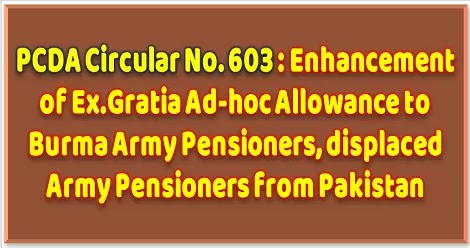 (b) Burma Army pensioners/ family pensioners who are Indian national and drawing their pension in India.

3. The categories of pensioners/family pensioners mentioned in Para 2 above will also be eligible to dearness relief on the ex-gratia ad-hoc allowance at the enhanced rate under the Govt. of India, Ministry of Defence, Deptt. of ESW letter No.1(5)/2017/D(Pen/Policy) dated 11.04.2018 at the rates admissible to Central Govt. pensioners from time to time.
4. The ex-gratia ad-hoc allowance on the authority of the Govt. of India, Ministry of Defence, Deptt. of ESW letter No. 1(5)/2017/D(Pen/Policy) dated 11.04.2018 will be paid by you to the categories of pensioners mentioned at para 2 above carefully. No further authorization on this account should be awaited from this office. Further, it is stated that the para 4 of this office Circular No. 419 dated 06.10.2009 will be operative. The extra liability on account of Ex-gratia adhoc allowance to Burma defence family pensioners will be borne by the Government of India.
5. The pre-revised Ex-gratia ad-hoc Allowance (including DR etc.) already drawn by the above pensioners from 1.1.2016 onward shall be adjusted from the enhanced Ex-gratia Ad-hoc Allowance which shall become payable w.e.f. 1.1.2016 under these orders. Policy and procedure regarding payment of Ex-gratia Ad-hoc Allowance shall continue to be governed by the existing instructions issued in the matter so far. It may be ensured that the payment to pensioners/family pensioners indicated in para 2 above, is made into the Aadhar linked Bank Accounts.
6. Any overpayment due for recovery may please be adjusted against the arrears now payable.
7. All other terms and conditions shall remain unchanged.
8. All PDAs are requested to identify the effective cases and revise the rate of Ex-gratia Ad-hoc allowance and render report of revision to Shri K.K. Pant, Sr. AO(P), The OI/C, Audit (Tech) Section of this office for onward submission to higher authorities.
9. This circular has been uploaded on PCDA (P) website www.pcdapension.nic.in.
(Sushil Kumar Singh)
Jt. CDA(P)
No. Gts/Tech/0148/LVIII
Dated: 11.07.2018
Source: Click here to view/download the PDF
[http://pcdapension.nic.in/pcdapension/7cpc/Circular-603.pdf]
Read also :  Brief of the meeting held on 4th Dece 2018 with the Member Staff, Railway Board, to discuss the important issues raised by AIRF with the Railway Board