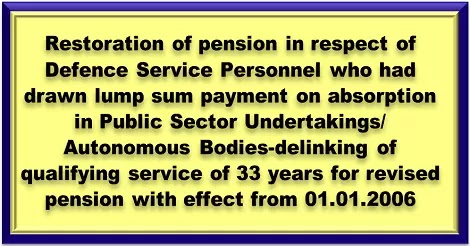 Subject :- Restoration of pension in respect of Defence Service Personnel who had drawn lump sum payment on absorption in Public Sector Undertakings/ Autonomous Bodies-delinking of qualifying service of 33 years for revised pension with effect from 01.01.2006.

A Copy of Govt. of India, Ministry of Defence, Deptt of ESW letter No. 1(04)/2007/D(Pen/Pol) dated 20.06.2018 on the above subject, which is self explanatory, is forwarded herewith for your information, guidance and necessary action.
Read also :  No proposal to increase or decrease the age of retirement of Central Govt. Employees : DoP&PW
2. In terms of GoI, MoD letter No. 1(2)/2016-D(Pen/Pol) dated 30.09.2016, revised consolidated pension and family pension of pre-2006 Armed Forces pensioners w.e.f. 1.1.2006 shall not be lower than 50 % and 30% respectively of the minimum of the pay in the pay band plus grade pay corresponding to the pre-revised scale from which the pensioner had retired/ discharged/ invalided out/ died including Military Service Pay and “X” Group pay, if any, without pro rata reduction of pension even if they had rendered qualifying service of less than 33 years at the time of retirement.

3. Now it has been decided by the Government that while determining the revised pension of above said category of absorbe pensioners/family pensioners with effect from 1.1.2006, the pension/ family pension shall also be revised in accordance with the provisions contained in the GoI, MoD letter No. 1(2)/2016-D(Pen/Pol) dated 30.09.2016 referred above.

4. The pension in terms of this order will be revised by the respective Pension Sanctioning Authorities Suo-moto by issuing Corrigendum PPOs in all affected cases. No application in this regard shall be called for either from the pensioners or from the PDAs concerned. Further, PDAs would also brought into notice of PSAs, such left out cases, if any, for revision of pension.