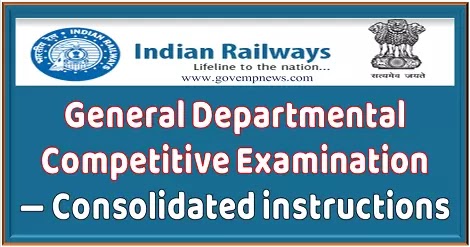 2.5 Regular Group ‘C’ and Group ‘D’ staff of the Production Units who fulfill the stipulated eligibility conditions are also permitted to appear in GDCE whenever conducted by the Zonal Railways for filling up the vacancies in different Group ‘C’ categories. The Zonal Railways should therefore, ensure that copies of notifications of selection under GDCE whenever issued by them are invariably endorsed to all the Production Units, so as to enable the employees of the Production Units also to apply for such selections, through proper channel, along with eligible employees of the Zonal Railway concerned. [Boards’ letter No. E(NG)I/2001/PM 2/12 dated 21.01.2002] (RBE No.09/2002).

Read Also: Representation of NFIR regarding upgradation of pay structure of JEs/SSEs
3. Examination Process:
Examination for all posts is to be conducted in single stage only in view of small number of Railway employees appearing against the same. [Boards’ letter No. E(NG)I/2008/PM 1/6 dated 10.06.2015] (RBE No.60/2015). GDCE will comprise of a written test followed by viva-voce* and the panels will be formed strictly in the order of merit.
(* Viva-voce stands deleted vide Boards’ letter No. E(NG)I/2000/PM 1/41 dated 07.08.2003).

3.1 The standard of examination shall be like that of Direct Recruitment to avoid any dilution of the cadre. If suitable candidates do not become available in adequate number as a result of GDCE, the shortfall will be made good by direct recruitment through Railway Recruitment Board.

3.2 The GDC Examination is to be conducted by the RRCs.

3.3 The date for GDCE is to be fixed by Railway Recruitment Cells (RRCs) of the Railway in consultation with CPOs and Chairman of respective RRBs.

3.5 Zone of consideration for GDCE will encompass staff belonging to all the Departments! Branches in a Division/ Workshop/ Headquarter-Office/ Extra Divisional Office/ Production Unit as the case may be subject to their applying through proper channel in response to the notification for GDCE. [Boards’ letter No. E(NG)I!1992/PM 2/16 dated 20.08.1993] (RBE No.129/1993).

4. Wherever, the vacancies remain unfilled in Promotion Quota, the same may be carried forward to LDCE/GDCE, if any, and unfilled vacancies of LDCE/GDCE may be carried forward to direct recruitment quota for the next year/next selection. In case there is no LDCE/GDCE for that post, the unfilled vacancies may be diverted to direct recruitment quota of the upcoming year. [Boards’ letter No. E(NOI/ 2010 / PM 1/ 16 dated 10.09.2014] (RBE No.97/2014).
5. The channel of GDCE and LDCE can be availed by the young, talented and qualified staff working in lower grades for fast track progression to higher grades.
6. It has been noticed that a large number of vacancies in the Railways remain unfilled and the Railways are not making timely use of the scheme of GDCE and LDCE for filling up vacancies, which is adversely affecting the motivation of the employees.
7. It is reiterated that Railways should ensure making use of these schemes liberally to fill up the vacancies timely by chalking out suitable action plan for the same.
Hindi version will follow.
( P.M. Meena )
Dy. Director -11/Estt.(NG)I
Railway Board

Read also :  Revision of remuneration of Para-Medical Staff on contract basis working in Railway Health Units - NFIR says thanks to Railway Board