Inclusion of a Parent as well as “Medical Attendant” in Special Passes issued on medical grounds in favour of minor children of railway employees – RBE No. 104/2018

Rashmi Prasad 0 August 9, 2018 7:35 pm
Inclusion of a Parent as well as “Medical Attendant” in Special Passes
issued on medical grounds in favour of minor children of railway employees – RBE No. 104/2018

RBE No.: 104/2018
ADVANCE CORRECTION SLIP No.: 77
Government of India
Ministry of Railways
(Railway Board) 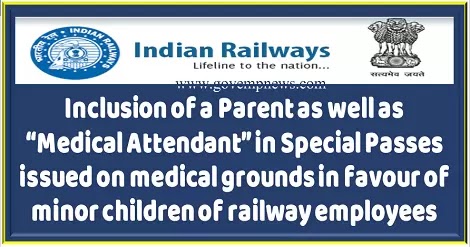 Sub: Inclusion of a Parent as well as “Medical Attendant” in Special Passes
issued on medical grounds in favour of minor children of railway employees.

In the PNM/AIRF Meeting with Board, the Federation had raised the issue
regarding non-inclusion of a parent in the Special Passes issued for
outstation medical treatment of children of railway employees due to
absence of necessary provision in the extant Pass Rules.
2. The issue has been examined in detail and in order to obviate the
difficulties in such cases, it has been decided with the approval of the
Competent Authority to incorporate the following provision in Schedule VI
(Special Passes) of the Railway Servants (Pass) Rules, 1986 (Second Edition
– 1993) as item No.5 (below Note of Item No.4) under Column 3
‘Entitlement/facilities’:-

“5. In case of minor children (i.e. boys under the age of 15 years and
girls under the age of 18 years), if referred to outstation hospitals for
medical treatment, Special Passes in favour of (i) railway servant or
his/her spouse, (ii) minor child requiring treatment and (iii) a Medical
Attendant (who may be a family member or dependent or any other person)
will be issued. The pass will ordinarily be issued for the class of
entitlement of the railway servant on privilege account or in higher class,
if otherwise admissible under these rules.”

3. This issues with the concurrence of Finance Directorate of Ministry of
Railways.
Read also :  Pay Commission : No proposal to abolish the system of formation of Pay Commission in future - MoF
(V. Muralidharan)
Dy. Director Estt.(Welfare)-I
Railway Board
Source: Railway Board (click here to view/download pdf)
[http://www.indianrailways.gov.in/railwayboard/uploads/directorate/establishment/E(W)/2018/RBE_104_2018.pdf]

Ministry of Railways 221 RAILWAY BOARD 422 Uncategorized 2198
Newer Post
7th CPC: Revision of pension in respect of pensioners of Kendriya Vidyalaya Sangathan retired prior to 01.01.2016
Older Post
Rest Rules for Running staff of Indian Railways – 16 hours rest at Headquarter and 8 hours rest at Outstation must be ensured to the Running Staff