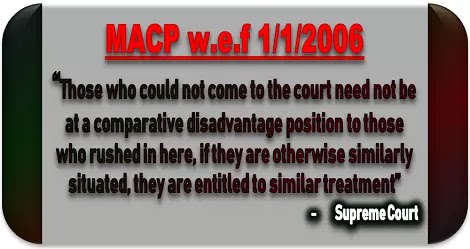 Sub:- Item No.2, 10 and 48 of the Joint Committee of MACP – Agenda items of
the Standing Committee.


Dear Sir,
This office vide Letters referred at 1 above dated 16/01/2018 and
27/03/2018 has represented to your good self to make the MACP scheme
effective from 1/1/2006 since the Hon’ble Supreme Court in its order in WP
3744 of 2016 dated 08/12/2017 in the matter of UOI Vs Shri Balbir Singh
Turn & Anr has directed the Govt. of India to implement the MACP Scheme
retrospectively from 1/1/2006. Till dated we have not received any positive
response from the DOPT. However the MOD vide letter referred at 2 above
(copy enclosed) have now issued instructions to implement the MACP Scheme
w.e.f. 1/1/2006 to the Armed Force Personnel by implementing the Hon’ble
Supreme Court judgment. Having implemented the judgment to one set of
employees and denying the same to the similarly placed employees is
discriminatory and unjustified.
The Hon’ble Supreme Court has repeatedly ruled that judicial decisions in
matter of a general nature should be extended to all similarly placed
employees. In the case of Inderpal Yadav Vs Union of India (1985) SCC 648,
the Apex court has held as Under:-


“Those who could not come to the court need not be at a comparative
disadvantage position to those who rushed in here, if they are
otherwise similarly situated, they are entitled to similar treatment”

In view of the above to avoid multiplicity of litigations on the matter and
since the item is also before the Joint Committee on MACP, it is requested
that Govt. orders may please be issued for implementing the MACP Scheme
w.e.f 1/1/2006. While issuing such an order, it may also be clarified that
the employees who were granted the benefit of ACP between 1.1.2006 to
31.08.2008 are not adversely affected and no recovery is ordered from them
in this connection.
Thanking you.
Read also :  Granting of benefit equal to one increment under FR 22(I)(a)(i) to the MCMs (Grade Pay 4200) on promotion to the post of CM (Grade Pay 4200) : MoD clarification
Yours faithfully,
Sd/-
(Shiva Gopal Mishra)
Secretary