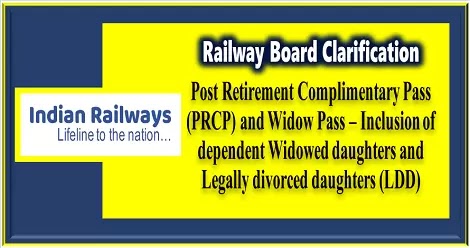 Clarification has been sought by two of the Zonal Railways, ie Eastern
& South Central Railways regarding inclusion of (i) dependent widowed
daughter and (ii) dependent LDD in Widow Pass with reference to the
instructions contained in Board’s Ietter cited under reference.

2. It is observed that in the clarification issued vide Boards letter cited
under reference, it has been stated that “

legally divorced daughter and Widowed daughter may be included in the
PRCP as dependent relative of the retired railways servants,
provided they reside with retired railway employees and subject
to fulfilment of the income criteria laid down for the purpose”

. The phraseology (i.e. as dependent relative); has created a doubt with”
regard to inclusion of dependent LDD/widowed daughters in the Widow Pass as it gives an erroneous impression that they
are to be treated as ‘dependent relative’. Moreover, no co-residency
requirement has been stipulated in the pass rules but the same has also
been incorporated in the said clarification.
Read also :  7TH CPC: Siachen Allowance @ Rs.30000 & Rs. 42500 for Jawans & Officers
3. The matter has been examined in the light of statutory provisions
contained in the Railway Servants (Pass) Rules, 1986 (Second Edition-1993),
as under:-

(ii) As far as PRCP is concerned, in terms of provisions (Col.3(i) of
Schedule-IV), PRCPs can be issued to railway servants for self,
wife/husband and children only, subject to the same conditions as
applicable to railway servants in service. Accordingly, the aforementioned
members of family i.e. dependent widowed daughters and dependent LDD are to
be included in PRCP as children in view of the fact that they fall within
the definition of “Family” as defined under Rule2(d) ibid.

(iii) As far as Widow Pass is concerned, in, terms of, provisions
(Col.3(ii) of Schedule-V), Widow pass can be issued on the same terms and
conditions as are applicable to PriviIege Passes except that dependent
relatives are not entitled to be included. Since, widowed daughters &
LDD are not part of “dependent relatives”’, but rather part of “family”, they are entitled to
be included in Widow Pass as family member as in the case if Privilege
Pass.

(iv) The word “dependent” has been used in Rule 2(d)(v) &2(d)(vi) of
Railway Servants (Pass) Rules, 1986 (Second Edition-1993) w.r.t.-widowed
daughters and LDD. However, the dependency criteria has been provided below
the definition of “dependent relative” under Rule 2(c)(vii). The same
definition for ‘dependency’ shall be followed for widowed daughters &
LDD.

4. Keeping in view the statutory provisions, as contained in the Railway
Servants (Pass) Rules, 1986 (second Edition-1993), it is now clarified that
(i) dependent widowed daughters (ii) dependent LDD are eligible to be
included in PRCP and the Widow Passes, provided they fulfil the income
criteria of dependency stipulated in the proviso below Rule-2(c)(vii) of
the aforesaid rules, as amended from time to time. The latest amendment to
the said proviso, as contained in Advance Correction Slip No.75, Issued vide this office letter No.E(W)2016/PS5-1/7 dated 24.11.2016, may
also be connected. Moreover, it may be noted that there is no requirement
of co-residency of dependent widowed daughter/LDD with the PRCP/Widow Pass
holder.
Read also :  Railways: On-board ticket checking and allotment of vacant berths through Hand Held Terminals by the TTEs - reg.
5. In View of foregoing, widowed daughters & LDD may be included in
PROP/Widow Pass as eligible member of “family”, provided they are dependent
on PRCP/Widow Pass holders, without insisting on co-residency criteria.
6. This issues with the approval of the Competent Authority and the
concurrence of Finance Directorate of Ministry of Railways.
(V. Muralidharan)
Dy. Director Estt. (Welfare)-I
Railway Board

Ministry of Railways 221 RAILWAY BOARD 422 Uncategorized 2198
Newer Post
CGHS: Revision of ceiling rates for reimbursement of the cost of Cardiac pacemaker, AICD, Combo-device, Rotablator and Aortic Stent Graft for beneficiaries of CGHS/CS(MA) Rules
Older Post
7th CPC: Revision of pension in respect of pensioners of Kendriya Vidyalaya Sangathan retired prior to 01.01.2016