Supreme Court allows Centre to provide reservation in promotion for SC/ST employees but didn’t clarify which law to follow.

NEW DELHI: The Supreme Court (SC) today permitted the Centre to provide reservation in promotion for SC/ST employee as per law until the issue is adjudicated by its Constitution bench. At the same time, the SC didn’t clarify which law to follow. 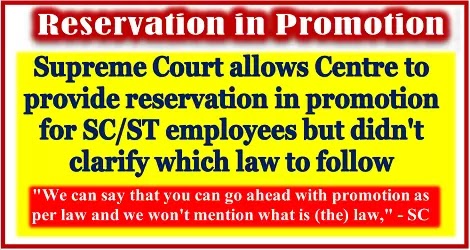 The Centre told the bench that it was bound to give promotion to its employees, and that promotion has virtually come to a standstill after orders passed by various high courts.

“I’m govt and I have to give promotion to my employee,” said Additional Solicitor General Maninder Singh to the SC.

Read also :  Provision for exclusion of retiring railway employees from mandatory joining of RELHS – 97 : Railway Board Order on AIRF PNM Item No. 16/2016

Then the SC said the promotion can be proceeded with as per ‘a law’.

“We can say that you can go ahead with promotion as per law and we won’t mention what is (the) law,” said the top court.

In April, Union minister and BJP ally Ram Vilas Paswan, who has emerged as the government’s key spokesperson on Dalit issues, told reporters that the government will move the apex court for the repeal of its directions which, he added, have halted the reservation for these communities in promotion.

His announcement comes close on the heels of the government’s decision to file pleas in the apex court against its two orders which, it has argued, would work against the interests of the SCs and the STs.

Read also: Supreme Court allows Govt. to proceed with the reservation in favour of SC/ST  “as per the Law” till the decision is pending

Paswan said the court has ruled in favour of reservation for SCs and STs in promotion but also introduced several conditions, which have led to non-implementation of quota guidelines.

According to these guidelines, state and central governments have to verify backwardness and efficiency for employees to be benefitted from reservation in promotion rules, Paswan said.

The Constitution regards schedules castes and tribes as backwards, he said, adding that SC and ST employees are as efficient as others so both criteria are unnecessary.
Read also :  Income under the House Properties - Computation, Deduction for interest on housing loan : Income Tax Act

Read at: Time of India