Rashmi Prasad 0 August 9, 2018 6:51 pm
Rest Rules for Running staff of Indian Railways – 16 hours rest at Headquarter and 8 hours rest at Outstation must be ensured to the Running Staff
GOVERNMENT OF INDIA
MINISTRY OF RAILWAYS
RAILWAY BOARD 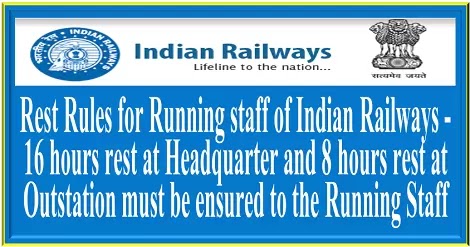 2. The matter has been deliberated upon in detail by the Board. The Board desires that in view of paucity of running staff on the Railways, aforementioned directive of the Board may be pended till adequate number of running staff becomes available to fill up the vacancies and the issue will then be suitably reconsidered by Board.

Attention is drawn to Board’s letter No. E(LL)/2009/HER/1 dated 07.10.2016 wherein the existing statutory/administrative provisions pertaining to rest of running staff were reiterated. Attention is also drawn to Board’s letter No. E(LL)/2016/HPC/7 dated 13.10.2016 laying down that the limit of “Stay away” from Headquarters for Running Staff should be fixed at 72 hours and also that call notice period should continue to be a part of the Headquarter/outstation rest.

2. However, it has been brought to the notice of the Board by AIRF during discussions on items No. 20/2009 and 30/2016 that Zonal Railways are violating Rest Rules for Running staff as call books are being served on them even before completion of their rest at Headquarters. Such practice, if being followed, is not in the interest of safety of rail operations.

3. The matter has been examined by the Board. During the PNM/AIRF meeting held on 22.01.2018, it has been decided that ‘Sixteen hours’ Headquarter rest must be ensured to the Running Staff. The running staff should be available for duty after completing 16 hrs. rest at Headquarter and after completing of 8 hrs. at outstation.
Read also :  Uniform Allowance Rs. 10000 to Army Jawans - Clarification on Media News

Ministry of Railways 221 RAILWAY BOARD 422 Running Staff 5 Uncategorized 2198
Newer Post
Inclusion of a Parent as well as “Medical Attendant” in Special Passes issued on medical grounds in favour of minor children of railway employees – RBE No. 104/2018
Older Post
Ministry of Defence: Fixation of maximum number of days for disposal of various types of cases