SEC Railway Order: Channel of promotion for Safaiwalas in Railways

विषय:- Channel of promotion for Safaiwalas.

1. Vide RBE No. 77/ 2016 [Estt. Rule No. 100/2016), Board have issued various recommendations in regard to providing channel of promotion for Safaiwalas.
2. The matter has been considered in consultation with GS/SECR MC, as desired by the Board, and the concerned PHODs. The following has been decided and to be implemented immediately:-
2.1 In all the technical departments, Safaiwalas should be included in the cadre of Helper/ Khalasis after 5 years of service assigning them bottom seniority, and be made eligible for further promotion as Technician Gr. III in G P Rs. 1900 (Level-1) as per seniority/ suitability and their qualifications.
2.2 As per Para 167 A of IREM -I, the posts of Field Workers (GP 1900) in Medical department are to be filled up through 50% DPQ from Gr.- D staff in Family Welfare Organisation. It has been decided that Safaiwalas of Medical department having required eligibility should be included with other eligible staff in the AVC of Field Worker against 50% DPQ.
2.3 Safaiwalas of all departments having requisite educational qualification should be included in the AVC of the following categories, subject to such employees passing selection/suitability test prescribed for the promotion :-

3. The above instructions should be strictly adhered to. This has the approval of PCPO.
Sd/-
(प्रदीप म‍िश्रा)
वर‍िष्‍ठ कार्म‍िक अधि‍कारी (एच.आर.डी.)
Read also :  Director of Estate: Retention of GPRA at the last place of posting by the civilian employees of Directorate General(Security), Cabinet Secretariat on their transfer to Chakrata, Uttarakhand 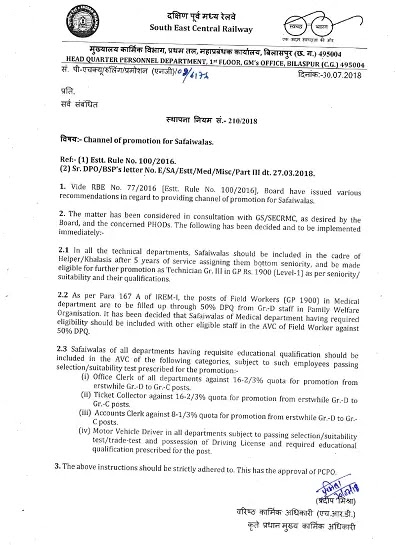