Rashmi Prasad 0 September 20, 2018 6:24 pm
7th Pay Commission: Warning To Central Government Employee May
Backfire
The Central government employees observed September 19 as ‘All Indian
Protest Day’ with an aim to put pressure to get hike beyond the
recommendations of the seventh pay commission. 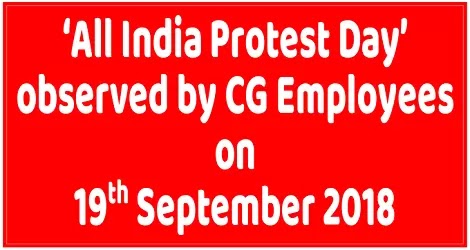 The day was observed by the employees despite warning from the Department
of Personnel and Training (DoPT) which warned deduction in wages and
appropriate disciplinary action against all those who participate in the
protest.
The DoPT had said that participating in any form of strike including mass
casual leave, go slow etc. or any action that abet any form of strike in
violation of Rule 7 of the CCS(Conduct) Rules, 1964 and will have to face
the consequences along with deduction of wages, may also include
appropriate disciplinary action.
Read also :  7th Pay Commission: Revised Pay Matrix Resolution dated 16th May 2017
However, such warning was something that didn’t go well with the employees.
The DoPT warning may have posed a hindrance before the employees taking
part in the protest but it only added to their resentment against the
Narendra Modi-led Central government.
“We are demanding what we deserve. Finance Minister Arun Jaitley had
promised hike when the recommendations of the pay commission was
implemented last year. Now, no one is listening to our genuine demands.
Besides, issue of such warning to curtail our voice is unacceptable,”
rued a CG employee.
Around 50 lakh CG employee have been demanding a hike in the minimum pay
since long. Instead of listening to their demand, warning was issued like a
dictator’s rule in the country. This big number of the CG employees may
hurt the Modi government in the ensuing general elections, believe
political experts.
Read also :  Recommendations of the 7th Central Pay Commission- bunching of stages in the revised pay structure
The Central government employees have been demanding a hike of Rs 8000 in
the minimum pay. They are presently getting a minimum pay of Rs 18,000 and
are demanding Rs 26,000 – an increase in the fitment factor by 3.68 times
from the existing 2.57 times.
Read more : www.odishatv.in