It has been observed that some of the staff/officers are not adhering to the office timings. It is also observed that staff members are coming late, leaving Office early without proper authorization. As per the instructions of Government of India, AADHAR Enabled Biometric Attendance System (AEBAS) installed at various sections should be used for marking the attendance by the staff/officers already enrolled in BAS and rest who have not yet been got enrolled due to non availability of AADHAR may mark their attendance on Attendance Register. Every employee should mark their attendance as per the timing given below:

The timing for the lunch break will be between 13:00 Hrs and 13:30 Hrs. The half-an-our time-limit for lunch break must be scrupulously observed not only by the subordinate staff but also by Supervisory Officers.
Read also :  Superannuation age of the Officers of Indian Ordance Factories Health Service to 65 years wef 27-09-2007
Hence, all employees are hereby informed that Office timings should be strictly adhered to. Every employee is expected to be in seat and to start work at the prescribed opening hours. Five minutes grace time may be allowed in respect of arrival time to cover any unforeseen contingencies. Such late coming (within the grace time) may be condoned unless it becomes matter of frequent recurrence.
Further, it is also informed that as per rules, Half-a-day’s casual leave should be debited to the Casual Leave account of an employee for each late attendance, but late attendance upto an hour, on not more than two occasions in a month, may be condoned if this is due to unavoidable reasons. Suitable disciplinary action will be taken against the employee concerned in addition to debiting half-a-day’s casual leave if he/she is persistently/habitually attending late or leaving early.
(K.Lalbaikchunga, IDAS)
Asstt.Controller (AN) 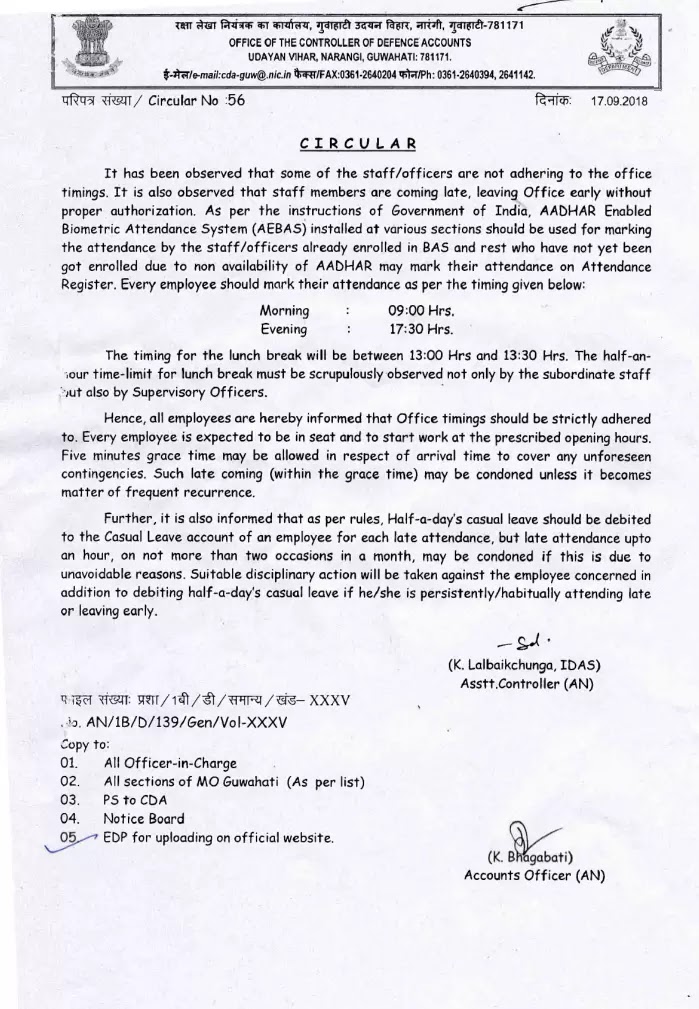