Rashmi Prasad 0 October 6, 2018 6:28 pm
12 days CL in a calendar year for CG Employees with Disabilities
Special dispensation in the form of Special Casual Leave to Central
Government Employees with disabilities
No. 25011/1/2008-Estt(A)

The undersigned is directed to say that the Sixth Central Pay Commission
had recommended that the number of Casual Leave available for employees
with disabilities should be 12 days as against 8 days for other employees
and it has been decided that the additional benefit of 4 days leave shall
be granted in the form of Special Casual Leave. The undersigned is
accordingly directed to convey the sanction of the Government that Central
Government employees with disabilities as defined in the Persons with
Disabilities (Equal Opportunities, Protection of Rights and Full
Participation) Act, 1995 may be granted Special Casual Leave for 4 (four)
days in a calendar year for specific requirements relating to the
disability of the official.

2. These order take effect from 1st September, 2008
Read also :  Provide breakup of pension and arrear payments & recoveries to pensioners - MoF issued guidelines
3. Hindi version will follow.
(C.A. Subramanian)
Director
To
All Ministries/Departments of Government of India (As per standard List).
Copy to: 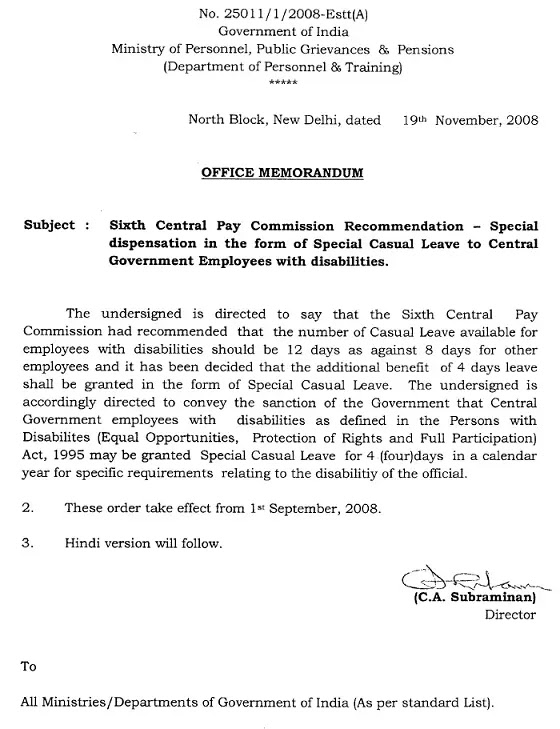 Read also :  Govt. declared 13 January 2019 as Restricted Holiday (R.H.) on the occasion of birthday of Guru Gobind Singh in place of Lohiri