2. As mentioned in the Appendix-II of the said Resolution, dated 6th July,2017 the existing allowances viz. Acting Allowance (Sl.No.2 of Appendix-II), and Dual Charge Allowance (Sl.No.52 of Appendix-II), have been abolished as a separate allowance and the eligible employees are now to be governed by the newly proposed Additional Post Allowance.
3. Accordingly, the above allowances shall stand abolished and the president is pleased to decide that the eligible employees shall now be covered under a new additional post allowance which will be administered as under:
Read also :  Extension of timelines for completion of APAR for 2018-19 on SPARROW where reporting/reviewing/accepting officers retire from service before the prescribed dates.

a. An employee formally appointed to hold full charge of the duties of a higher post, in addition to the duties of his own post, will be entitled to draw the pay that would be admissible to him if he was appointed to the higher post on regular basis OR 10 percent of his present Basic pay per month, as Additional Post Allowance, whichever is more beneficial, provided the sum total of his Basic pay and additional Post Allowance does not exceed the Apex Pay i.e. Rs.2,25,000/-

b. An employee formally appointed to hold full charge of the duties of a post on similar level as his own post, in addition to the duties of his own post, will be entitled to draw 10 percent of his present Basic Pay per month, as Additional Post Allowance, provided the sum total of his Basic Pay and Additional Post Allowance does not exceed the Apex Pay.

c. No Additional Post Allowance should be paid to an employee who is appointed to hold current charge or the routine duties of an additional post, irrespective of the duration of the current charge.

d. The allowance will be admissible only if the duration of additional charge exceeds 45 days.

Read also :  DoPT: NFSG in the Level-6 (erstwhile GP-4200) to Stenographers Grade'D' of CSSS - reg
4. Additional Post Allowance will be granted to Junior Commissioned Officers (JCOs) of the Army & equivalent in Navy and Air force for holding appointment of Captain & equivalent and Major & equivalent.
5. In so far as grant of Additional Post Allowance to officers in Indian Railway is concerned, other terms & conditions as provided in Board’s letter dated 19.08.2011 and provisions contained in para 645 to 650 of Indian Railway Establishment Manual Vol.I which are not modified by Provisions of this OM will continue.
6. Additional Post Allowance will not be granted to an employee for holding additional charge of lower post.
7. These orders shall be effective from 1st July 2017.
Sd/
(Ashok Kumar Jain)
Deputy Secretary to the Govt. of India.
To
(i) Ministry of Defence
(Shri Prashant Rastogi, US(Pay/Service)
Sena Bhawan, New Delhi
(ii) Ministry of Railways
(Ms. G. Priya Sudarsani, Jt. Director (Finance-Estt)
Railway Board,
Rail Bhawan, New Delhi
Copy to: Joint Secretary (Pers), Department of Expenditure, North Block, New Delhi. 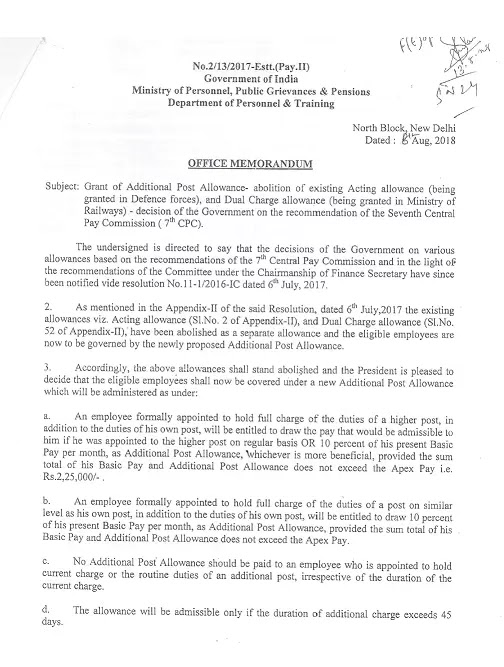 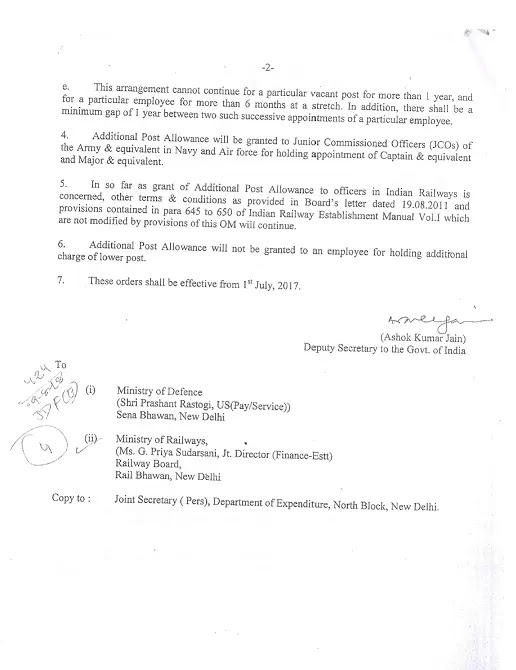