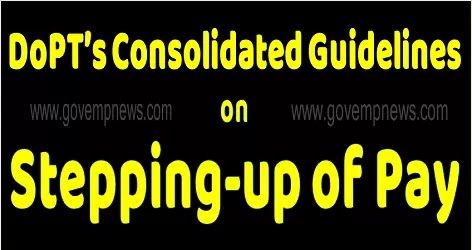 The undersigned is directed to say that the issue of anomaly relating to senior Government employees drawing less pay than their juniors due to application of provisions of FR 22(I)(a)(1) is considered on merits for allowing stepping up pay of the seniors so as to bring it at par with that of the junior in accordance with the guidelines scattered in various OMs noted in the margin. A need has been felt to consolidate guidelines on stepping up of pay at one place keeping in view the provisions of the Central Civil Services (Revised Pay) Rules, 2016, [in short CCS(RP)Rules, 2016] as the frequent references on such issues continue to be received in this Department.

2. Consequent upon implementation of CCS(RP)Rules, 2016, the President is pleased to decide the following:
(i) In order to remove the anomaly of a Government servant promoted or appointed to a higher post on or after 1-1-2016 drawing lower pay in that post than another Government servant junior to him in the lower grade and promoted or appointed subsequently to another identical post, the pay of the senior Government servant in the higher post should be stepped up to a figure equal to the pay as fixed for the junior Government servant in that higher post. The stepping up should be done with effect from the date of promotion or appointment of the junior Government servant and will be subject to the following conditions, namely:
(a) both the junior and the senior Government servants should belong to the same cadre and the posts in which they have been promoted are identical in the same cadre;
(b) the Level in the Pay Matrix of the lower and higher posts in which they are entitled to draw pay should be identical;
(c) the anomaly is directly as a result of the application of the provisions of Fundamental Rule 22(1)(a)(1) read with Rule 13 of CCS(RP)Rules, 2016. For example, if the junior officer was drawing more pay in the existing pay structure than the senior by virtue of any advance increments granted to him, the provisions of this sub-rule should not be invoked to step up the pay of the senior officer.
(ii) The order relating to re-fixation of the pay of the senior officer in accordance with clause (i) shall be issued under Fundamental Rule 27 and the senior officer shall be entitled to the next increment on completion of his required qualifying service with effect from the date of re-fixation of pay.
3. The following instances/events wherein juniors draw more pay than seniors, do not constitute anomaly and, therefore, stepping up of pay will not be admissible in such events:
(a) Where a senior proceeds on Extra Ordinary Leave which results in postponement of his Date of Next Increment in the lower post and consequently he starts drawing less pay than his junior in the lower grade itself. He, therefore, cannot claim pay parity on promotion even though he may be promoted earlier to the higher grade than his junior(s);
(b) If a senior forgoes/refuses promotion leading to his junior being promoted/appointed to the higher post earlier and the junior draws higher pay than the senior.
(c) If the senior is on deputation while junior avails of the ad-hoc promotion in the cadre, the increased pay drawn by the junior due to ad-hoc/officiating and/or regular promotion following such ad-hoc promotion in the higher posts vis-a-vis senior, is not an anomaly in strict sense of the term;
(d) If a senior joins the higher post later than the junior, for whatsoever reasons, whereby he starts drawing less pay than the junior. In such cases, senior cannot claim stepping up of pay at par with that of his junior.
(e) If a senior is appointed later than the junior in the lower post itself whereby he is in receipt of lesser pay than the junior, in such cases also the senior cannot claim pay parity in the higher post if he draws less pay than his junior though he may have been promoted earlier to the higher post.
(f) Where an employee is promoted from lower post to a higher post, his pay is fixed with reference to the pay drawn by him in the lower post under FR22(I)(a)(1) read with Rule 13 of CCS(RP)Rules, 2016 and due to his longer length of service in the lower grade, his pay may get fixed at a higher stage than that of a senior direct recruit appointed to the same higher grade and whose pay is fixed under different set of rules. For example a Senior Secretariat Assistant (SSA) on promotion to the post of Assistant Section Officer (ASO) gets his pay fixed under FR 22(I)(a)(1) with reference to the pay drawn in the post of SSA, whereas the pay of ASO(DR) is fixed under Rule 8 of CCS(RP)Rules, 2016 at the minimum pay or the first Cell in the Level, applicable to ASO to which he is appointed. In such a case, the senior ASO (DR) cannot claim pay parity with that of the promotee junior ASO.
(g) Where a senior is appointed in higher post on ad-hoc basis and is drawing less pay than his junior who is appointed in the same cadre and in same post on ad-hoc basis subsequently, the senior cannot claim pay parity with reference to the pay of that junior since the ad-hoc officiating service in higher post is reversible and also since full benefits of FR22(I)(a)(I) are not available on ad-hoc promotion but only on regular promotion following such ad-hoc promotion without break.
(h) Where a junior gets more pay due to additional increments earned on acquiring higher qualifications.
Note: The above instances/ events are only illustrative and not exhaustive.
4. These orders shall be in supersession of D/o Expenditure’s OM F.2(78)-E.III(A)63 dated 2nd February, 1966 and DOP&T’s OM No.4/7/92-Estt(Pay-I) dated 4th November, 1993.
5. This OM is effective from 01.01.2016.
6. In so far as persons serving in the Indian Audit and Accounts Department are concerned, these orders have been issued after consultation with the Comptroller and Auditor General of India.
7. Hindi version will follow.
(Rajeev Bahree)
Under Secretary to the Government of India.
To
Copy also forwarded to:
(Rajeev Bahree)
Under Secretary to the Government of India
click to view/download signed pdf (facebook login required)
[http://documents.doptcirculars.nic.in/D2/D02est/omrufYm.pdf]