Subject : Transfer on deputation/foreign service of Central Government Employees to ex-cadre posts under the State Governments/ Union Territories or to any entity controlled by and located in the States / UTs – relaxation of para 8.5 of O.M. dated 17.6.2010.


This Department’s OM No. 6/8/2009-Estt.(Pay-II) dated 17th June, 2010 regulates Pay, Deputation (Duty) Allowance, Tenure of Deputation / Foreign Service and other terms and conditions on the subject of deputation / foreign service of Central Government employees to ex-cadre posts under the Central Government, State Governments, Public Sector Undertakings, Autonomous Bodies, Union Territories Administration, local Bodies etc and vice-versa. Subject to its applicability as provided in para 2 of the OM, these instructions cover cases of deputation/foreign service where Central Government is either lending authority or borrowing authority or both.
2. As per para 8.5 of the aforesaid OM, a Central Government employee shall be eligible for deputation / foreign service to posts in State Government / State Government Organisations/Governments of UTs / Government of UT’s Organisations / Autonomous Bodies, Trusts, Societies, PSUs etc. not controlled by the Central Government only after he has completed 9 years of service and is clear from vigilance angle.
3. As per para 10 of the aforesaid OM, any relaxation of these terms and conditions will require the prior concurrence of the Department of Personnel & Training.
4. Various administrative Ministries / Departments / Borrowing Organisations have been approaching this Department for relaxation of the eligibility condition of minimum 9 years of service for proceeding on deputation / foreign service, on case to case basis, citing exigencies, quoting provisions of para 10 of the OM dated 17.06.2010.
5. The matter has been considered in this Department and it has been decided that Ministries/Departments may consider and allow relaxations to para 8.5 of the OM dated 17.06.2010 with the approval of their Minister-in-charge in following category of cases:-

a) A Central Government employee after completion of 7 years of service in his/her cadre, may be allowed to go on deputation to any State of North Eastern Region and Jammu and Kashmir and Union Territories of Andaman & Nicobar and Lakshadweep or on foreign service to any entity controlled by and located in the said States/ Union Territories.

6. The cases not covered by above dispensation will not be considered for relaxation. All other terms and conditions issued vide OM No. 6/8/2009-Estt.(Pay II) dated 17th June, 2010 as amended from time to time will remain unchanged.
7. In so far as persons serving in the Indian Audit & Accounts Department are concerned, these orders issue after consultation with the Comptroller & Auditor General of India.
8. These orders shall come into effect from the date of issue of this OM.
(A.K. Jain)
Deputy Secretary to the Govt. of India 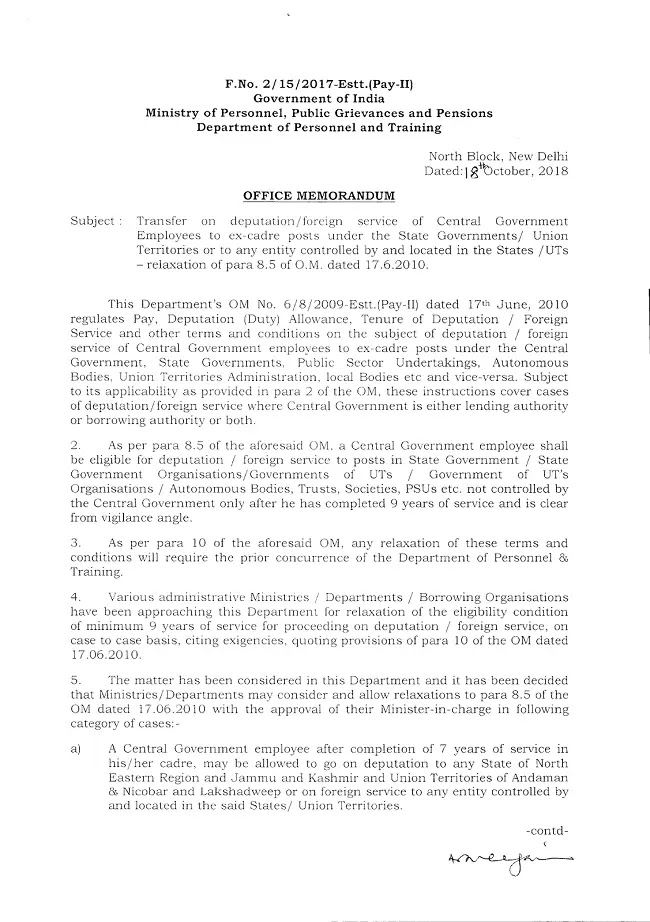