The undersigned is directed to forward herewith a copy of Department of Expenditure’s OM No.8-23/2017-E.III A dated 28.9.2018 for information and compliance to all cadre units of CSS in respect of Assistant Section Officers of CSS cadre, who got promoted on or after 1.1.2006 and whose pay, as fixed under Rule 13 of CCS (RP) Rules, 2008 happened to be lower than the entry pay of direct recruit Assistant Section Officers appointed on or after 1.1.2006.
Read also :  CGHS Order: Empanelment of AYUSH Hospitals under CGHS/CS (MA) Rules

(K. Srinivasan)
Under Secretary to the Government of India
Tele: 24642705
Click here to read: Central Civil Services (Revised Pay) Rules, 2008 – Section II of the Part ‘A’ of the First Schedule thereto- entry pay for directrecruits appointed on or after 1.1.2006 and pay fixation in the case of persons other than such direct recruits. 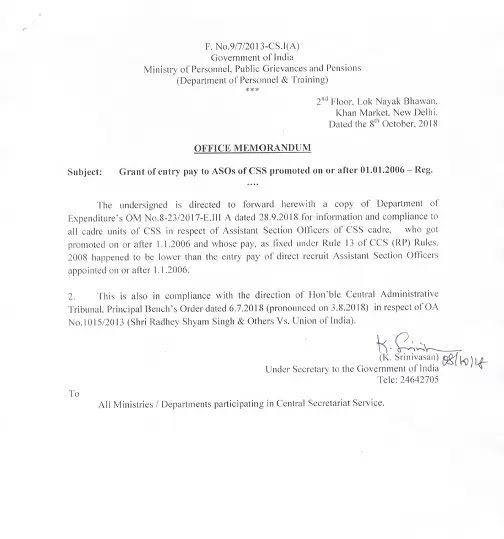