Prior to implementation of recommendations of Sixth Central Pay Commission, fixation of pay of Railway employees on appointment from one post to another was governed by Rule 1313 {FR22(1)(a)(1)} and 1313 {FR22(1)(a)(2)} R-II depending upon whether situation involved assumption of duties and responsibilities of greater importance or otherwise. Rule 13 of Railway Services (Revised Pay) Rules, 2008 governing fixation of pay on promotion on or after 1.1.2006, however, envisage grant of one increment equal to 3% of sum of the pay in the pay band and existing grade pay (to be rounded off to next multiple of 10) in the case of promotion from one grade pay to another in the revised pay structure. Further clarification were issued vide Board’s letter No. PC-VI/2008/I/RSRP/1 dated 11.02.2009 (RBE No. 28/2009).
2. References have been received from some of the Railways/PUs and both staff Federations regarding admissibility of fixation with extra increment in terms of Rule 13 of RS(RP) Rules, 2008 in the situation of placement of Pharmacist (GP Rs. 2800) in GP Rs. 4200 on completion of two years regular service and placement of Private Secretaries Grade I (GP Rs. 4800) in GP Rs. 5400 (PB 2) on completion of 4 years regular service on non-functional basis. The matter has been examined in consultation with Ministry of Finance and DoP&T and it is clarified that the benefit of fixation of pay in terms of Rule 13 of RS (RP) Rules, 2008 would be admissible in such situations of placement in higher Grade Pay on non- functional basis.
3. This issues with the concurrence of the Finance Directorate of the Ministry of Railways.
Hindi version will follow.
(S. Balachandra Iyer)
Executive Director, Pay Commission-II
Railway Board 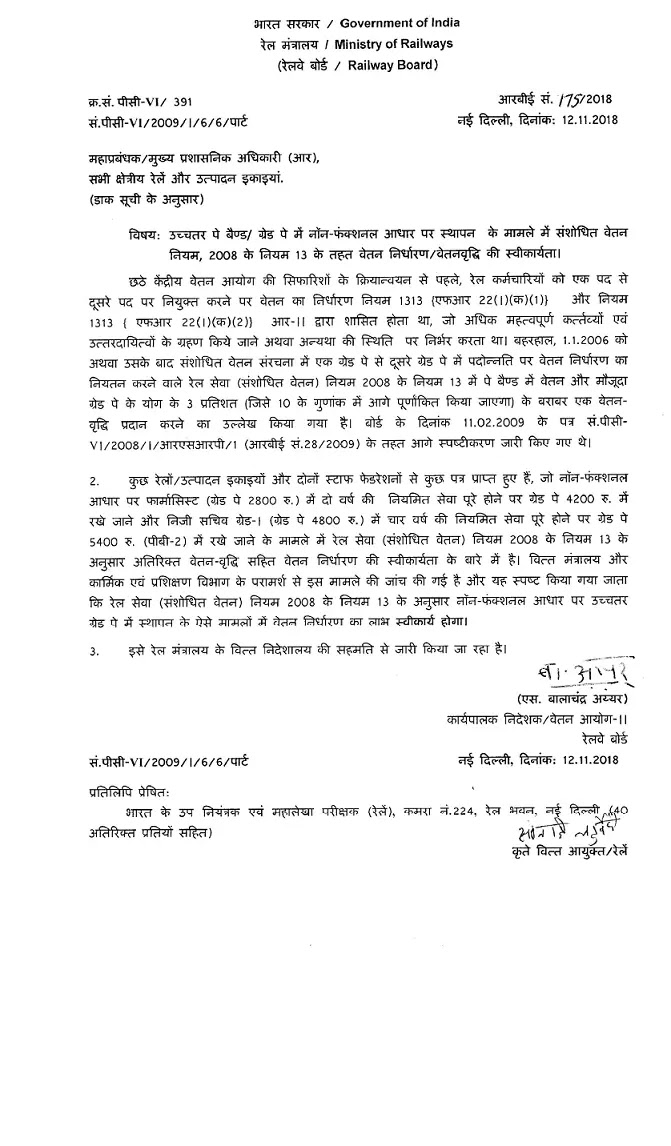