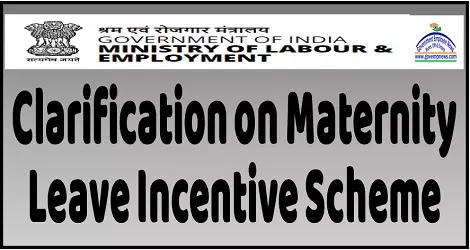 In a section of media, there have been some reports about Maternity Leave
Incentive Scheme. In this regard, the Ministry of Labour & Employment
has clarified the following:-

Major Impact:
The proposed Scheme, if approved and implemented shall ensure
the women in this country an equal access to employment and other approved benefits alongwith
adequate safety and secure environment. Also, the women shall continue to bear the major share
of household work as well as child care. The work places will be more and more responsive to the
family needs of the working women.
Read also :  7th CPC: HRA will be @ 24%, 16% & 8% wef 1.7.2017
Current Stage of the Proposal:
There are some media reports that this Scheme has been approved/notified.
However, it is clarified that Ministry of Labour & Employment is in the process of obtaining
necessary budgetary grant and approvals of Competent Authorities. The reports that it will be funded
from Labour Welfare Cess, is also incorrect, as no such cess exists under this Ministry.