Right to resign cannot be denied by the Employer : Supreme Court Judgment

“To resign is a right of an employee who cannot be forced to serve in case he is not willing until and unless there is some stipulation in the rules or in the terms of appointment or disciplinary proceedings is pending or contemplated which is sought to be avoided by resigning from the services.” 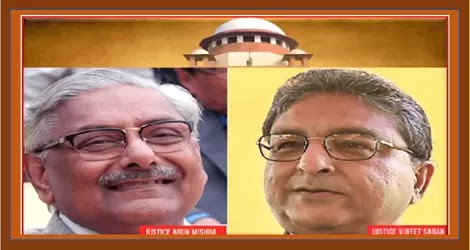 IN THE SUPREME COURT OF INDIA
CIVIL APPELLATE JURISDICTION

CIVIL APPEAL NO.7822 OF 2011
Heard the learned counsel for the parties.
The appellant is aggrieved by the judgment and order dated 7.9.2010 passed by the High Court of Bombay, dismissing Writ Petition No.1740 of 2010. The question arises whether the appellant ceased to be an employee of the respondent on 1st October 2006 since he had resigned on 1.9.2006 as 30 days period came to an end on the aforesaid date.
The appellant joined the services of Air India Ltd. as Assistant Aircraft Engineer in Major Maintenance Division of Engineering Department w.e.f. 1.9.1992. As per the terms and conditions, he was required to serve Air India for a minimum period of five years, as per the condition stipulated in the letter of his appointment. As on the date he resigned, he had completed five years of service. The Certified Standing Orders framed under the Certifying Officer Under Industrial Employment (Standing Orders) Act, 1946 (in short “The Act of 1946”) as introduced in Air India Ltd. and as applicable to the establishment, required the employer to define the terms and the conditions of service applicable to a workmen and inform him of the same. The Certified Standing Order, inter alia, deals with the conditions under which an employee can tender his resignation. He is entitled to receive the certificate of service rendered at the time of cessation of his employment. The Certified Standing Order confers a right on the employer under the Act of 1946 not to accept the resignation if at the relevant time of his resignation any disciplinary action is pending or is contemplated.
As per the case set up by the employee, Certified Standing Order prescribes that an employee can leave the service by serving 30 days’ notice or paying the sum equal to 30 days wages. The question of acceptance arises in a case of a shorter notice, for resignation where the question of payment of wages as involved. The resignation is effective after 30 days even without its acceptance. The appellant served notice for resignation on 1.9.2006 to take effect from 1.10.2006, precisely on expiry of 30 days’ period. There was no right available with the Air India Ltd. to decline to accept the resignation as informed vide communication dated 20.9.2006.
After resigning, there was cessation of employment with the Air India Ltd. The appellant then joined Jet Airways on 3.10.2006. He approached the Air India to release his pending dues, provident fund, gratuity, and unpaid wages. Air India Ltd. issued a letter dated 16.7.2008 to the effect that since his resignation had not been accepted, he was asked to report for duty. The appellant raised the grievance in the centralized grievance cell and served a reminder for payment of the dues. Ultimately, the appellant filed writ application in the High Court of Bombay on 23rd July 2010 which had been dismissed. Consequently, the appeal has been filed in this Court.
It was urged by the learned counsel appearing on behalf of the appellant that there was no necessity of acceptance of resignation under Standing Order 18 framed under the Act of 1946. By virtue of the provisions contained in Standing Orders, 30 days’ notice has to be given or wages in lieu of the notice period has to be paid by a permanent workman. He has relied upon the decisions in Punjab National Bank v. P.K. Mittal (1989) Supp. (2) SCC 175, State of U.P. v. Achal Singh (2018) 10 SCALE 89, and Dinesh Chandra Sangma v. State of Assam. (1977) 4 SCC 441.
On the other hand, learned counsel appearing on behalf of the respondent has relied upon the decision of this Court in Moti Ram v. Param Dev and Anr. (1993) 2 SCC 725 to contend that acceptance of resignation was necessary.
In order to appreciate the rival submissions, it is necessary to consider the provisions contained in Standing Orders 17 and 18 of the Standing orders framed under the Act of 1946 by Air India. Standing Orders 17 and 18 are extracted hereunder:
“17. Termination of service:
(i) The services of a workmen may be terminated by the Competent Authority, without assigning reasons as under:
(ii) No notice is necessary for terminating the service of a workman employed for a specified period at the end of that period.

(iii) No notice is necessary for terminating the services of a casual or part-time workman.

UPON hearing the counsel the Court made the following ORDER