Consequent to the decision taken by the Government of India on the
recommendations of the 7th CPC, Kit Maintenance Allowance, Shoe Allowance,
Uniform Allowance, Washing Allowance, Robe Allowance and Robe Maintenance
Allowance, have been subsumed into a single Dress Allowance and orders in
this regard have been issued vide Board’s order No. PC-VII/2017/I/7/5/7 dated 03.10.2017 (PC-VII No. 64/ RBE No. 141/2017).
2. A separate Prosecution Cadre is also being formed in the Indian
Railways. While formalisation of the Cadre is awaited, officials presently
designated as Public Prosecutors and Assistant Public Prosecutors continue
to perform prosecution related duties, including Court appearances.
References are being received from Railways on payment of separate Dress
Allowance to such officials as they are no longer part of the Railway
Protection Force.
Read also :  7th CPC: Entitlement of TA/DA to JCM Members - DoP&T Order
3. The matter has been considered in Board’s office. While the Prosecution
Cadre sanction and formation is being followed up with the Department of
personnel & Training, it is nevertheless a fact that Public
Prosecutors/Asst. Public Prosecutors as designated presently continue to
perform prosecution related duties that involve appearing in Court.
Accordingly, all such Public Prosecutors/Asst. Public Prosecutors who are
actually attending Courts in performance of their official duties may be
paid Dress Allowance @ Rs. 10,000 per annum provisionally as governed by
all instructions/terms and conditions issued under Board’s Order No.PC-VII/2ol7/I/7/5/7 dt. 03.10.2017 (circulated as RBE No. 141/2017).
4. These orders will be taken up for review as and when the Prosecution
Cadre is formally notified.
Read also :  7th CPC Anomaly arising from the decision to reject option No.1 in pre-2016 pension fixation - NAC Agenda Item No. 7
5. This issues with the approval of Board (MS and FC).
Hindi version will follow.
(Jaya Kumar G)
Deputy Director(Pay Commission) VII
Railway Board
Read : Railway Board’s Order No. PC-VII/2017/I/7/5/7 dt. 03.10.2017 (RBE No. 141/2017) 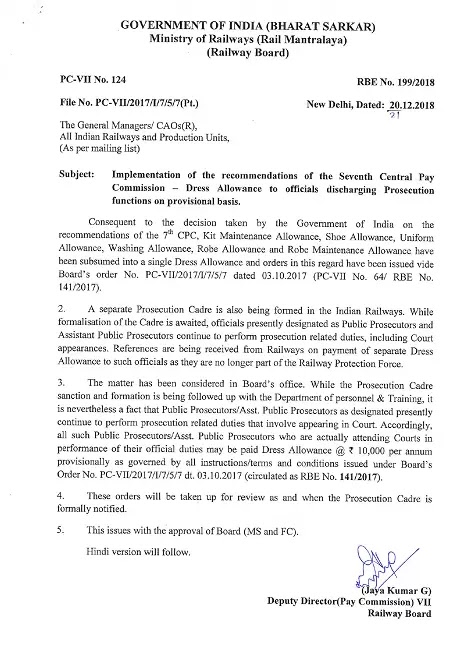