Countrywide General Strike on January 8th and 9th, 2019 : the 12 Point Charter of Demands

Countrywide General Strike on January 8th and 9th, 2019 : the 12 Point Charter of Demands
AN APPEAL TO ALL CPSU WORKERS
New Delhi: 27th December 2018

The General Strike Call by the Central Trade Unions, on the following demands, was given in the background of neo-liberal offensives unleashed by the Modi Government against the working people and trade unions and their hard won rights. And Central Public Sector Undertakings and the workers are the worst victims.

The 12 Point Charter of Demands
Read also :  Timeline of finalizing the pension case as prescribed in CCS (Pension) Rules, 1972

It is imperative to note that the Charter of Demands include some of the burning issues of the workers of Central Public Undertakings (CPSU).

Apart from the disastrous privatisation onslaught and all out unrelenting attack to ultimately dismantle our Public Sector in its entirety, CPSU workers are facing atrocious imposition of anti-worker dictates concerning ongoing wage negotiations.

In this crucial juncture, the General Strike call on 8th and 9th January 2019 is naturally, a weapon in the hands of our CPSU’s workers to oppose and resist the anti labour and anti national policies of the Central Government of the day. Therefore, we appeal to all the workers, employees and officers of all CPSU’s to support and join this historic General Strike. Keeping in view the massive participation of CPSU workers in the 2nd September 2016 General Strike, we believe that this time also CPSU workers irrespective of affiliations shall support and join the strike on 8th and 9th January 2019 in massive scale. 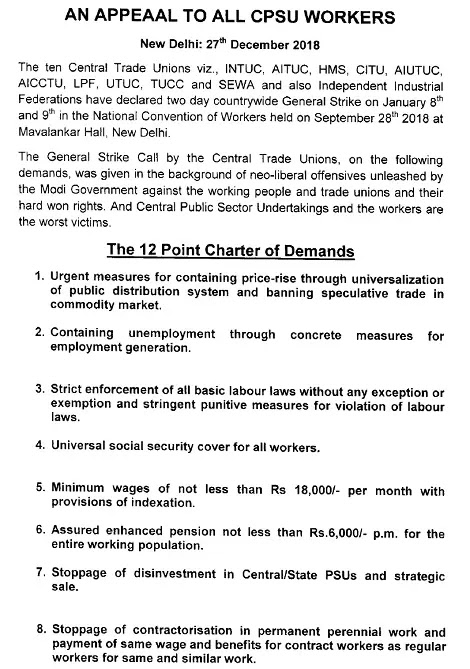 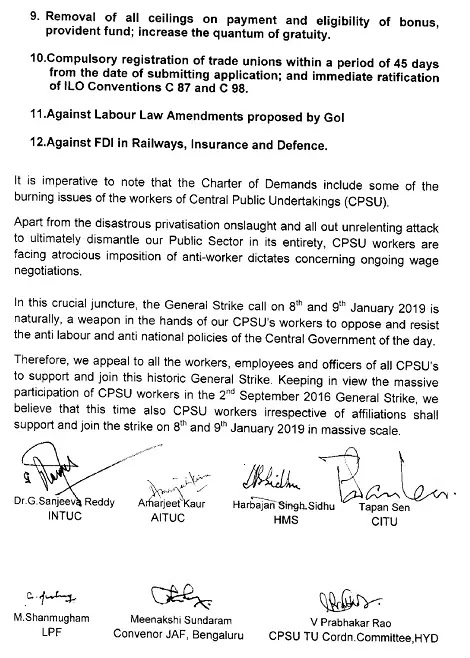