Grant of paid holiday in Gujarat and Jharkhand due to Bye-elections to the State Legislative Assemblies – DoP&T OM dated 12.12.2018 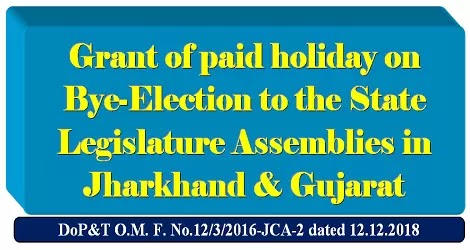 Subject: Bye- elections to the State Legislative Assemblies in Gujarat and
Jharkhand – Grant of paid holiday – regarding

The undersigned is directed to state that, as informed by the Election Commission of India, bye- elections to the following clear vacancies in the
State Legislative Assemblies in the states of Gujarat and Jharkhand are to be
held on 20.12.2018:
Read also :  Payment on account of discontinued allowances — Daily Officiating Allowance
2. In this regard, the guidelines already issued by this Department vide OM
No. 12/14/99-JCA dated 10.10.2001 would have to be followed for the Central
Government Offices, including industrial establishments, in the concerned
States.
3. The above instructions may please be brought to the notice of all
concerned.
4. Hindi version will follow.
(Raju Saraswat)