No proposal to increase or decrease the age of retirement of Central Govt. Employees : DoP&PW

Will the PRIME MINISTER be pleased to state:

(a) whether the Government has worked out a plan to lower the age of senior citizen entitlement of employees to 58 years;

(c) whether the Government is contemplating to increase or decrease the age for pension;

(d) if so, the details thereof and if not, the reasons therefor; and

(e) the details of salient features of pension policy?

(a) to (d): No Madam. Department of Social Justice & Empowerment has informed that there is at present no proposal in that Department for lowering the age of senior citizen. Government employees become entitle to pension on retirement. There is also no proposal to increase or decrease the age of retirement of Central Government Employees.

(e): The salient features of the pension entitlements of employees retiring from the Central Government are as under:

i. A Government servant retiring in accordance with the rules, after completing a qualifying service of not less than 10 years, is entitled to a pension @ 50% of his last pay or 50% of average emoluments for the last 10 months, whichever is more beneficial to him/her.

ii. After completion of 80 years of age or above, additional pension @ 20% to 100% is payable to the retired Government servant.

iii. A retired/retiring Government servant is entitled to, at his/her option, a lump sum payment, by commutation of a maximum of 40% of his/her pension.

iv. On retirement, a Government employee is entitled to a retirement gratuity based on his/her emoluments and length of qualifying service.

vi. The family of a Government servant, who dies while in service after having rendered not less than seven years’ continuous service, is entitled to a family pension 50% of the last pay for a period of ten years. Thereafter, the amount of family pension is 30% of his/her last pay. 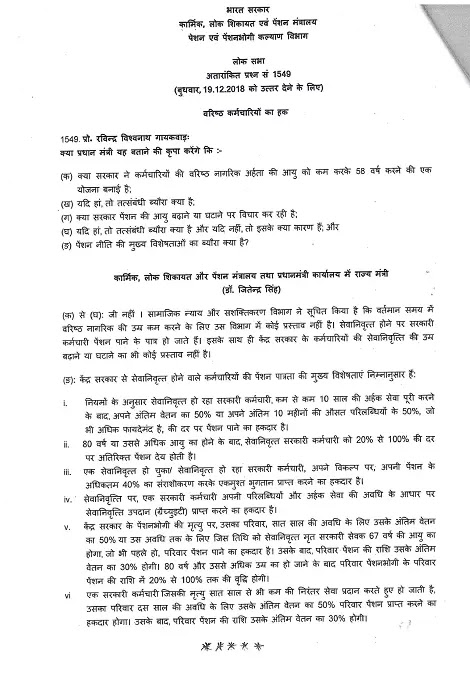