Will the Minister of HEALTH AND FAMILY WELFARE be pleased to state:

(b) whether any steps are being taken by the Government to control it, if so, the details thereof; and

Read also :  LTC: Govt is considering to extend the date beyond 25th Sep 2018 for relaxation to visit NER, J&K and A&N Islands

(c) if not, the reasons therefor?

(a): Health being a state subject, information pertaining to the doctors doing private practice across the country including West Bengal is not centrally maintained. As per Rule 13 of CHS Rules, 2014, persons appointed to the Central Health Service shall not be allowed private practice of any kind whatsoever including any consultation and laboratory service.

In one case reported from Central Government Health Services(CGHS) Delhi, disciplinary proceedings have been initiated against the concerned officer as per rules and procedure of the Government.

Read also :  No proposal to increase or decrease the age of retirement of Central Govt. Employees : DoP&PW

(b) & (c): As and when any instance of private practice by a Central Health Service doctor is brought to the notice of this Ministry, appropriate action is taken in the matter as per rules and procedure of the Government. 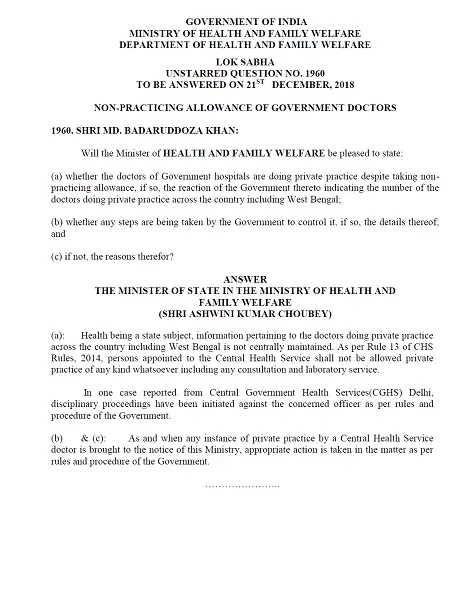 LOKSABHA 70 Uncategorized 2198
Newer Post
No proposal to allow CGHS beneficiaries to take treatment at all private hospitals accredited to NABH – Loksabha Q & A
Older Post
DoPT: Revised Procedure for consultation with UPSC in connection with the departmental proceedings against Govt. Servants – O.M. dated 28.12.2018