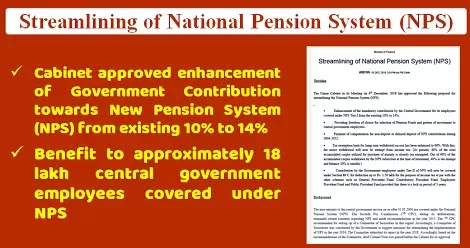 The Union Cabinet in its Meeting on 6th December, 2018 has approved the
following proposal for streamlining the National Pension System (NPS).
Read also :  7th CPC - Delay in 7th CPC Allowances: Is any compensation on the way: Paramnews.com
Background
The new entrants to the central government service on or after 01.01.2004
are covered under the  National Pension System (NPS). The Seventh Pay Commission (7th CPC), during its
deliberations, examined certain concerns regarding NPS and made recommendations in the
year 2015. The 7th CPC recommended for setting up of a Committee of Secretaries in this regard.
Accordingly, a Committee of Secretaries was constituted by the Government to suggest measures for
streamlining the implementation of NPS in the year 2016. The Committee submitted its report in the year
2018. Accordingly, based on the recommendations of the Committee, draft Cabinet Note was placed before the
Cabinet for its approval.
Implementation strategy and targe
ts
The proposed changes to NPS would be made applicable immediately once time
critical decisions are
Read also :  कॉन्फेडेरेशन ने रि—इम्प्लायड कर्मियों के सन्दर्भ में सी.सी.एस आर.पी. रूल्स — 2016 के प्रासंगिकता के सम्बन्ध में एक व्यापक प्रस्ताव वित्त मंत्रालय को भेजा
taken in consultation with the other concerned Ministries / Departments.
Major Impact
Expenditure involved
The impact on the exchequer on this account is estimated to be to the tune
of around Rs. 2840 crores for the financial year 2019-20, and will be in the nature of a recurring
expenditure. The financial implications on account of provisions regarding payment of compensation for non-deposit
or delayed deposit of NPS contributions during 2004-2012, would be in addition to the amount
indicated above.
No. of beneficiaries
Approximately 18 lakh central government employees covered under NPS would
be benefitted from the streamlining of the National Pension System.
States/districts covered
Pan India.
Details and progress of scheme if already running
Presently, the new entrants to the central government service on or after
01.01.2004 are covered under the NPS. NPS is being implemented and regulated by Pension Fund Regulatory and
Development Authority in the country.
Source: PIB