The issue of restructuring of isolated Group ‘C’ cadres/categories of posts
over Indian Railways has been under consideration in Board’s office. Staff Federations (AIRF and NPR)
have also been raising the issue of such isolated categories of posts not being covered by periodic cadre
restructuring exercises undertaken. In this context, based on data received from Railways/Units, cadre restructuring exercise
for the isolated category of Photographers posts spread across different Field Units has been approved
by Board, as below:

Note : The revised percentage distribution will be implemented on the basis
of financial neutrality by matching surrender of post(s) in Level-4.

2. The benefit of cadre restructuring as per percentage distribution of
posts will be applicable on ‘floating basis’, with the usual connotation that this term implies. Southern Railway has been nominated as the cadre  management railway, with the approval of Board, for giving effect to
this exercise

. Southern Railway will therefore be responsible for centralized maintenance of seniority, and for
giving effect to the benefits of this cadre restructuring

based on appropriate ‘floating’ of posts. Available cadre position and
matching surrender value  calculations as worked out by this Directorate, will be sent separately
to Southern Railway.

E(NG) Directorate Will co-ordinate in this matter with Southern Railway and the
other Railways/Units where these posts are in operation.

3. The cadre restructuring orders will be effective from the date of issue
of these orders.

4. Extent instructions including regarding D&A/Vigilance clearances,
minimum qualifying service period, reservation of posts, modalities of selection/suitability for the posts
will continue to hold good for the cadre restructuring exercise.

5. This issues in consultation with the Establishment (N) Directorate, the
concurrence of the Finance Directorate and the approval of the Board (MS,
FC, CRB).
Read also :  7th CPC – Discontinuance of Family Planning Allowance - Railway Board Order
The receipt of this letter may please be acknowledged.
(M. Panda)
Joint Director, Pay Commission 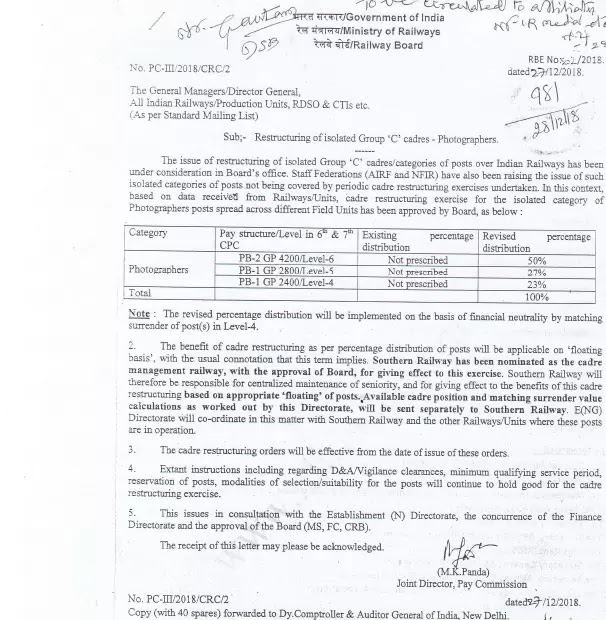