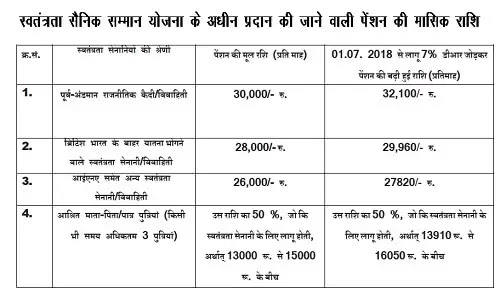 Will the Minister of HOME AFFAIRS be pleased to state:-

(a) the number of persons receiving pension under the freedom fighters pension scheme, State-wise;
(b) the total expenditure incurred by the Government on this account;
(c) whether the Government is considering to increase the amount of pension under this scheme; and
(d) the time by which a final decision in this regard is likely to be taken?
ANSWER
MINISTER OF STATE IN THE MINISTRY OF HOME AFFAIRS (SHRI KIREN RIJIJU)
(a): State-wise/Union Territory-wise total number of persons receiving pension under the Swatantrata Sainik Samman Pension Scheme, 1980 (renamed as Swatantrata Sainik Samman Yojana) is at Annexure-I.
(b): The expenditure incurred by Government during 2016-17, 2017-18 and during the current financial year 2018-19 on this account are Rs.761.85 Crore, Rs. 748.09 Crore and Rs.594.08 Crore (upto October, 2018) respectively.
(c) & (d): The central freedom fighter pension/family pension has already been revised and increased by the Central Government with effect from 15.08.2016. Dearness Allowance/Relief as given to the Central Government employees/pensioners twice a year, has been made applicable to the central freedom fighter pensioners also. At present the amount of pension being given to the freedom fighters and their eligible dependents are at Annexure-II.
ANNEXURE-I
STATE WISE LIST OF CENTRAL FREEDOM FIGHTERS AND THEIR ELIGIBLE DEPENDENTS DRAWING PENSION UNDER SWATANTRATA SAINIK SAMMAN YOJANA AS ON NOVEMBER, 2018
Read also :  Opportunity for revision of option to come over to revised pay structure - DoP Order
ANNEXURE-II
MONTHLY AMOUNT OF PENSION PROVIDED UNDER SWATANTRATA SAINIK SAMMAN YOJANA
Read also :  Continuance of LARSGESS for safety staff of Railways - NFIR's letter to MR