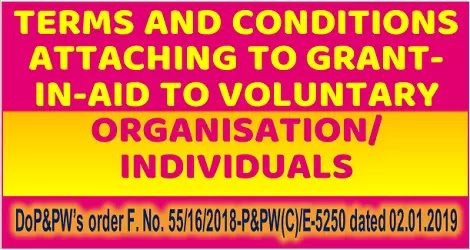 1. The Grantee will execute bond favour of the President of India in the
prescribed form. The bond shall be supported by two surities if the granter
is not a legal entity.

2. The accounts of the project programme shall be maintained separately.
Reports on progress of expenditure will be sent as and when asked for by
granter. The accounts shall be open to inspection by the Sanctioning
authority. The audit of accounts shall be done both by the Comptroller and
Auditor General of India under the provision of CAG (DPC) Act, 1971 and
internal audit by the Principal Accounts Office of the Ministry or
Department. The audited accounts shall be sent to the granter annually.
3. The grant shall be utilized for the purpose for which it is sanctioned
and in the stipulated time schedule. The granter shall not divert any
portion of the grant received by him for any other purpose or organisation
or individual.
4. The grantee shall furnish every quarter progress of expenditure on the
grants received upto the end of the previous quarter, alongwith a progress
report on the implementation of the project. Release of further instalments
of grant shall be made on receipt of such reports The report will clearly
indicate the targets fixed in the project and achievements there against
lack of clarity in the report may lead to delay in release of further
instalments of grant. Further amounts may be also not be released if the
progress in implementation of the projects is not clear from the report on
the achievements of targets is not give.

4.A. The organisation may please also ensure that the following points get
mentioned in their Quarterly Progress Report.
i) That they are not getting assistance from any one else for the
programme.
ii) Separate accounts are being maintained in the Bank.

(ii) the Government shall born
the stamp duty payable on these presents.