CGDA: Handling of Disiplinary proceedings in case of transfer of delinquent officials – reg.

Subject: Handling of  Disciplinary  proceedings  in case of transfer  of  delinquent officials- reg.

Recently, it is observed that the disciplinary proceedings, which are pending in respect of an official, are being transferred from office of one PCDA/CDA to the office of another PCDA/CDA consequent to the transfer of that charged official. Apparently, the proposed action for transfer of disciplinary proceedings is based on Item No. 2 of Min. of Home Affairs OM No. F.39/1/69-Estt(A) dated 16.04.1969, reproduced as Govt. of India’s Decision No. 3 under Rule 12 in the Swamy’s Compilation of CCS CCA Rules, 2019 Edition (page 43).
2. In the above connection, kind reference is invited to the HQrs Office circulars bearing No. 0687/ AN/F dated 23.09.1967 and No. 0687/AN/F dated 19.07.1969 (copies enclosed). It may be seen that the HQrs Office circular dated 19.07.1969 was issued after examination of the provisions contained in the said MHA OM dated 16.04.1969.
3. Therefore, for the sake of administrative conveyance and uniformity of procedure in initiation / finalisation of disciplinary proceedings in such cases (transfer of charged official) should continue to be taken as explained at Para I(b) of HQrs Office circular dated 23.09.1967.  The gist is reproduced below:-
sd/-
(Avinash  Dikshit)
Sr.Jt.CGDA (AN) 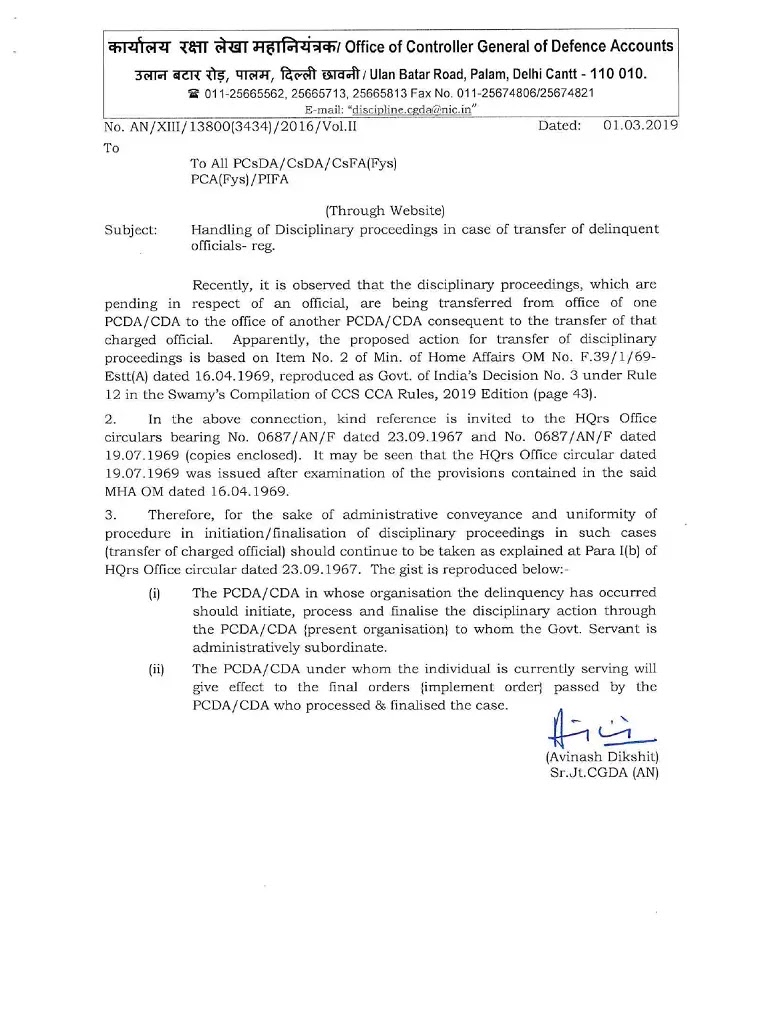