Nationawide Dharna/Demonstration on 13th March 2019 : Govt. warned against the participation

It has been brought to the notice of the Government that a forum by the
nomenclature of National Joint Council of Action (NJCA) has decided to
organize Dharna/Demonstrations in front of Jantar Mantar, New Delhi and all
across the country on 13th March, 2019 in order to protest against New
Pension Scheme (NPS).

2. The instructions issued by the Department of Personnel and Training
prohibit the Government servants from participating in any form of
strike/protest including mass casual leave, go slow etc. or any action that
abet any form of strike/protest in violation of Rule 7 of the CCS (Conduct)
Rules, 1964. Besides, in accordance with the proviso to Rule 17(1) of the
Fundamental Rules, pay and allowances is not admissible to an employee for
his absence from duty without any authority. As to the concomitant rights of
an Association after it is formed, they cannot be different from the rights
which can be claimed by the individual members of which the Association is
composed. It follows that the right to form an Association does not include
any guaranteed right to strike/protest. There is no statutory provision
empowering the employees to go on strike. The Supreme Court has also agreed
in several judgments that going on a strike/performing any sort of protest
is a grave misconduct under the Conduct Rules and that misconduct by the
Government employees is required to be dealt with in accordance with law.
Any employee going on strike/protest in any form would face the consequences
which, besides deduction of wages, may also include appropriate disciplinary
action. Kind attention of all employees of this Department is also drawn to
this Department’s O.M. No.33012/1/(s)/2008- Estt.(B) dated 12.9.2008 , on
the subject for strict compliance (enclosed as Annexure-A).
3. All officers are requested that the above instructions may be brought to
the notice of the employees working under their control. All officers are
also requested not to sanction Casual Leave or any other kind of leave to
the officers and employees, if applied for, during the period of proposed
Dharna/demonstration, and ensure that the willing employees are allowed
hindrance free entry into the office premises.
4. In case employees go on Dharna/demonstration, all Divisional Heads
are requested to forward a report indicating the number and details of
employees, who are absent from duty on the day of Dharna/demonstration ,
i.e., 13.03.2019.
sd/-
(G. Srinivasan)
Director (Reservation)
011-23093074 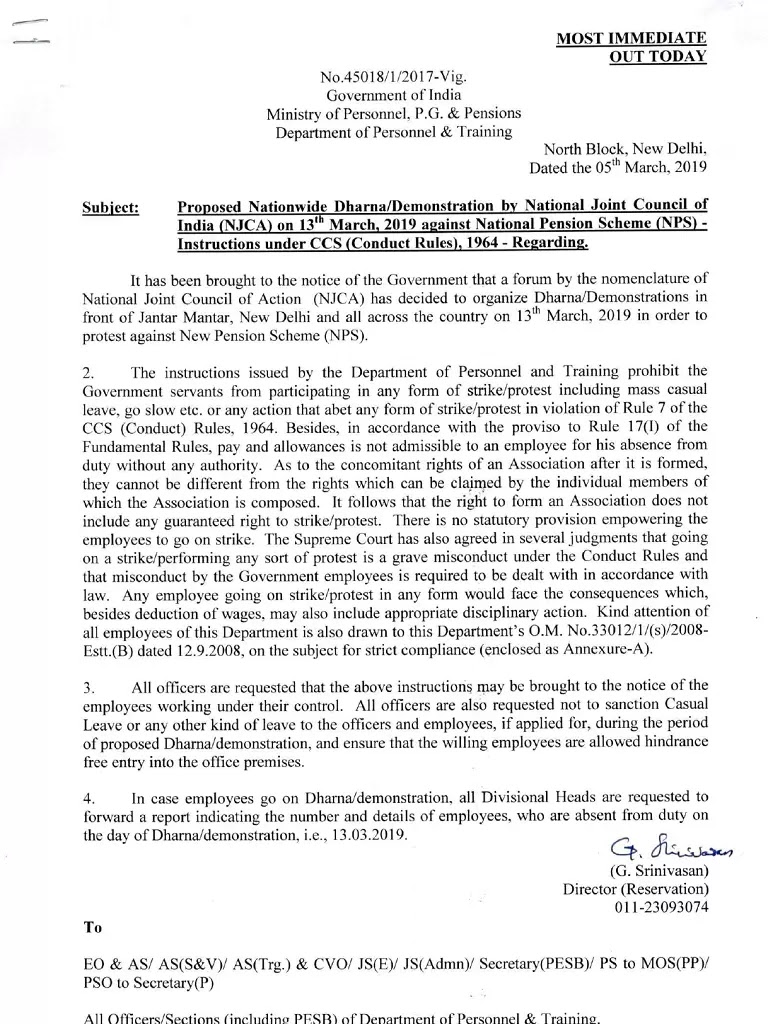