TO BE PUBLISH ED IN THE GAZETTE OF INDIA,EXTRAORDINARY,PART II, SECTION 3, SUB·SECTION (1)

Government of India
Ministry of Finance
Department of Revenue
Central Board of Direct Taxes
NOTIFICATION No 31/2019
New Delhi, the 31st of March, 2019
In exercise of the powers conferred under sub-section (2)
of section 139AA or the Income-tax Act, 1961 (Act), the Central Government, hereby notifies
that every person who has been allotted permanent account number as on
the 1st day of July, 2017, and who is eligible to obtain Aadhar number,
shall intimate his Aadhaar number to the Principal Director General of Income-tax (Systems) or Principal Director of Income tax (Systems) in
the form and manner specified in Notification no.7 dated 29th of June, 2017 issued by
the Principal Director General of Income Tax (Systems) by 30th of September 2019,
2. This notification shall not be applicable to those persons or such class of persons or any State or
part of State who/which are/is specifically excluded under sub-section (3) of section 139M of the Act.

3. However notwithstanding the last date of linking of Aadhaar number with PAN being
extended to 30.09.2019 in para 1 above, it is also made clear in Circular
No. 6 of 2019 that w.e.f 1st of April, 2019, it is mandatory
to quote Aadhaar number while filing the return of income as required under
Section 139AA(1)(ii) unless specifically exempted as per any notification
issued under sub-section (3) of section 139AA of the Act. It is also made
clear that the returns being filed either electronically or manually cannot
be filed without quoting the Aadhaar number. 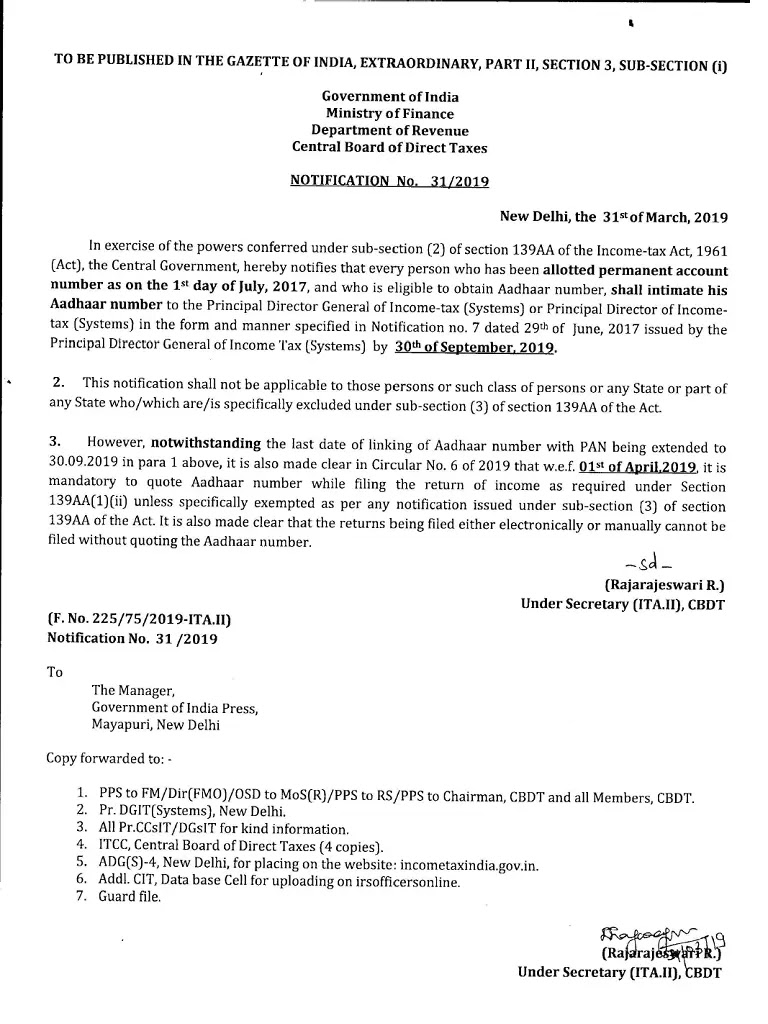 Read also :  Agenda Items for next meeting of Standing Committee of NC (JCM)

Aadhar Linking 8 CBDT 16 Dept of Revenue 4 Uncategorized 2198
Newer Post
Quote Aadhaar number while filing the Income Tax Return – CBDT Circular No. 6/2019
Older Post
GPF : Liberalization of provisions for withdrawals from the Fund : 90% for Housing any time & for Motor Vehicle & other reason after 10 years service, without reason before 2 years of superannuation, No documentary proof required etc.