With the concurrence of the Finance Department, GNCTD, to the rates approved by the Election Commission of India, vide U.O. No. DSF-V /296 dated 25-03-2019 and DSF-V/343 dated 29-03-2019, the rates of remuneration to be paid to the staff deployed on Election Duty for the General Election to LokSabha-2019 are as under :-


The Above Mentioned Rates Are Equally Applicable To Police Personnel Actually Deployed On Polling Booths/Counting Centres.

The above rates are payable to the staff
for attending class, collecting polling material as well as attending duty on the polling day/counting day.

The letter of the Commission communicated vide this office letter No. F.CEO/Admn/104(2)/2013/Cir/16980-94 dated 20-03-2014 inter-alia direct that keeping in view the long hours of duty, the day next to the day of polling
is also to be treated as period on Election duty. Accordingly,
polling staff shall be paid for maximum 4 days for training collecting polling materials ete. And 2 days for polling day, subject to the condition that such number of training are actually attended and record.


Reserve staff shall be paid 4 days for training and only 1 day for polling day.


Reception duty staff may be paid remuneration for 2 days i.e. 1 day for training and 1 day for attending the duty on reception counter on polling day.


Voter assistance booth staff may be paid remuneration equal to Polling officers i.e. Rs.250/-per day for 2 days i.e. 1 day for training and 1 day for attending the duty on polling day.


Counting duty staff (including statistical staff) may be paid remuneration for 2 days i.e. 1 day for training and 1 day for attending the duty on counting day.


MTS / Class-IV /Volunteers deployed for assisting voters with disabilities will be paid remuneration @ Rs. 150/-per day for 2 days i.e. one day for training and 1 day for attending the duty on polling day.

If same Micro-Observer is deployed for polling day as well as on counting day, it will be treated as sperate duty and remuneration will be paid accordingly.

The staff deployed on polling stations/counting centers may be provide with packed lunch and/or light refreshment @ Rs. 150/- per head per day. In case of difficulty in respect of providing packed lunch, a cash payment @ Rs. 150/-per head may be paid to poll/counting staff. Further,
police Personnel deployed on election work on poll/counting day including mobile parties/Home Guards/Forest Guards/Gram Rakshak Dal/NCC Sr. Cadets/Ex-army/Central Police Force may be provide with packed lunch/refreshment or payment in lieu thereof as is being given to Polling/Counting Personnels. No refreshment charge should be paid to the reserve parties for polling day as they can be spared immediately, if they are not needed on that day.

All the Assistant Expenditure Observes and Executive Magistrates (Team In-chage) of Flying Squad
Deployed are to be reimbursed Rs.500/- (Rupees Five Hundred only) as a fixed amount on account of Mobile Recharge for whole election process.
The above rates may be strictly adhered to and all personnel on election duty be well apprised of these rates during training etc.

All the DEOs/ROs are requested to ensure that the officers/staff deployed on Election Duty for the General Election to Lok
Sabha-2019 are paid accordingly and following conditions are to be followed
:-
The actual expenditure booked on this account may be intimated to Audit Officer, CEO (HQ) as the same is to be conveyed to Finance Department, as per the approval. 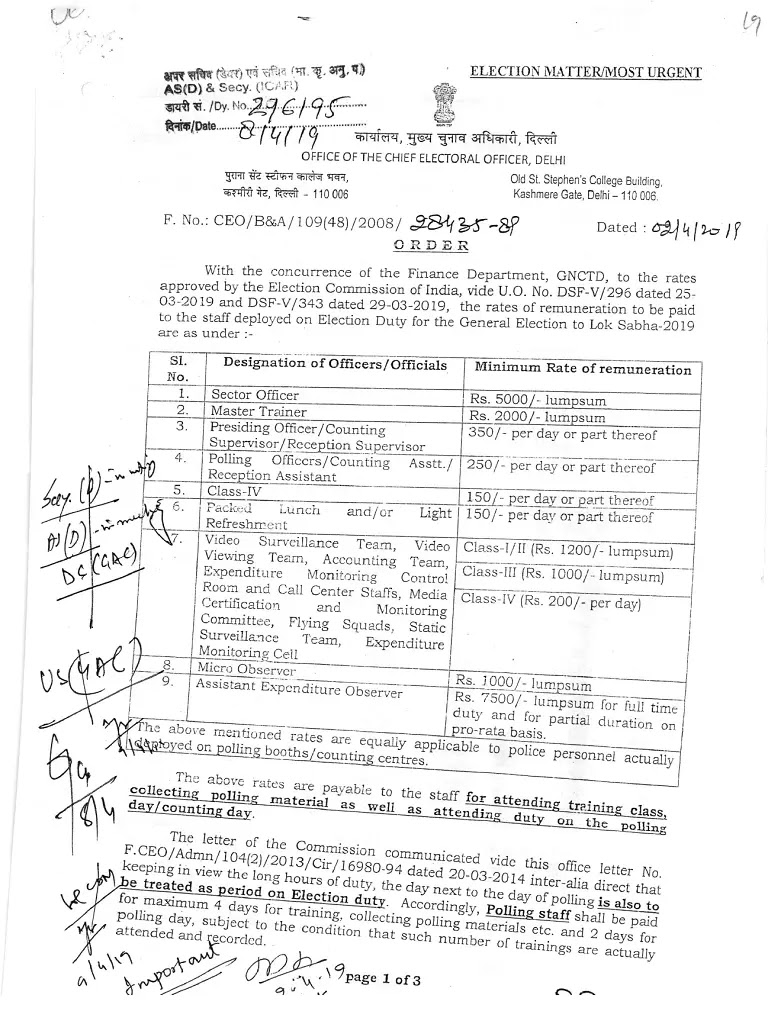 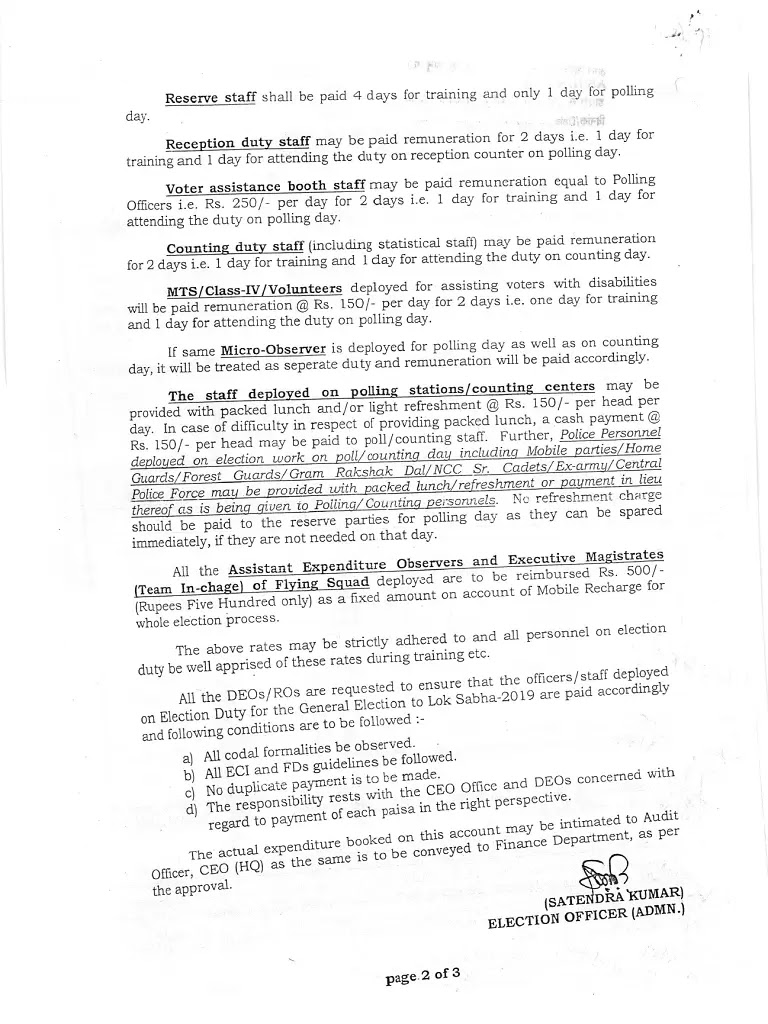 Read also :  CBDT extended due date for deposit of TDS and issue of Form-16 for deductors of Odisha due to cyclone "Fani"
Election Duty 1 Remuneration 1 Uncategorized 2198
Newer Post
DoP : Considering transfer under Rule 38 against vacancies reported for filling up through SSC
Older Post
Premature closure of RD/TD/MIS accounts – reg.