GPF : Liberalization of provisions for withdrawals from the Fund : 90% for Housing any time & for Motor Vehicle & other reason after 10 years service, without reason before 2 years of superannuation, No documentary proof required etc.

Subject: Amendment to the provisions of General Provident Fund (Central Service) Rules 1960- liberalization of provisions for withdrawals from the Fund by the subscribers – regarding.

The General Provident Fund (Central Service) Rules came into force in 1960 and Rule 15 of the said rules provide for withdrawals by the subscribers. Some amendments have been made from time to time to address the concerns raised by the subscribers. However, the provisions, largely remain restrictive. There is a felt need to liberalize provisions, raise limits and simplify the procedure.

2. The provisions in the rules have been reviewed and it has now been decided to permit withdrawals from the fund by the subscriber for the following purposes:

(i) Education – This will include primary, secondary and higher education, covering all streams and institutions,
(ii) Obligatory Expenses viz. betrothal, marriage, funerals, or other ceremonies of self or family members and dependants,
(iii) Illness of self, family members or dependants,
(iv) Purchase of consumer durables.

(v) Housing including building or acquiring a suitable-house or a ready-built flat for his-residence,
(vi) Repayment of outstanding housing loan,
(vii) Purchase of house site for building a house,
(viii) Constructing a house on a site acquired,
(ix) Reconstructing or making additions on a house already acquired,
(x) Renovating, additions or alterations of ancestral house.

4. A subscriber may be allowed to withdraw upto ninety percent of the amount standing at credit for the above purposes. It is also decided do away with the present instructions which lay down that subsequent to the sale of house for which GPF withdrawal has been availed, the amount. withdrawn has to be deposited back. GPF withdrawal for housing purpose will no longer be linked with the limits prescribed under HBA rules. A subscriber may be permitted to avail the facility at any time during his service.


5. A subscriber may be permitted to withdraw three- fourth of the amount standing at credit or cost of the vehicle, whichever is less for the above purposes. Withdrawal for the above purpose will be permitted after completion of 10 years of service.
6. Presently, withdrawal of upto 90% of balance without assigning reasons is allowed for Government servants who are due for retirement on superannuation within a year. It is proposed that this may be allowed for upto two years before superannuation.
7. In all cases of withdrawal from the fund by the subscriber, the declared Head of Department is competent to sanction withdrawal. No documentary proof will be required to be furnished by the subscriber. A simple declaration form by the subscriber explaining the reasons for withdrawal would be sufficient.
8. As per the GPF (CS) Rule 1960, no time limit has been prescribed for sanction and payment of withdrawal amount. Therefore, it has been decided to prescribe a maximum time limit of fifteen days for sanction and payment of withdrawal from the Fund. In case of emergencies like illness etc., the time limit maybe restricted to seven days.
9. Necessary amendment to the GPF (Central Service)Rules 1960, giving effect to the above provisions will be issued in due course.
10. In so far as persons serving in Indian Audit and Accounts Department are concerned, these orders issue in consultation with the Comptroller and Auditor General of India.
11. This issues with approval of Department of Expenditure, vide their ID No. 4(1 )/EV/2017 dated 28.02.2017.
12. Hindi version of this OM will follow
sd/-
(Sujasha Choudhury)
Director 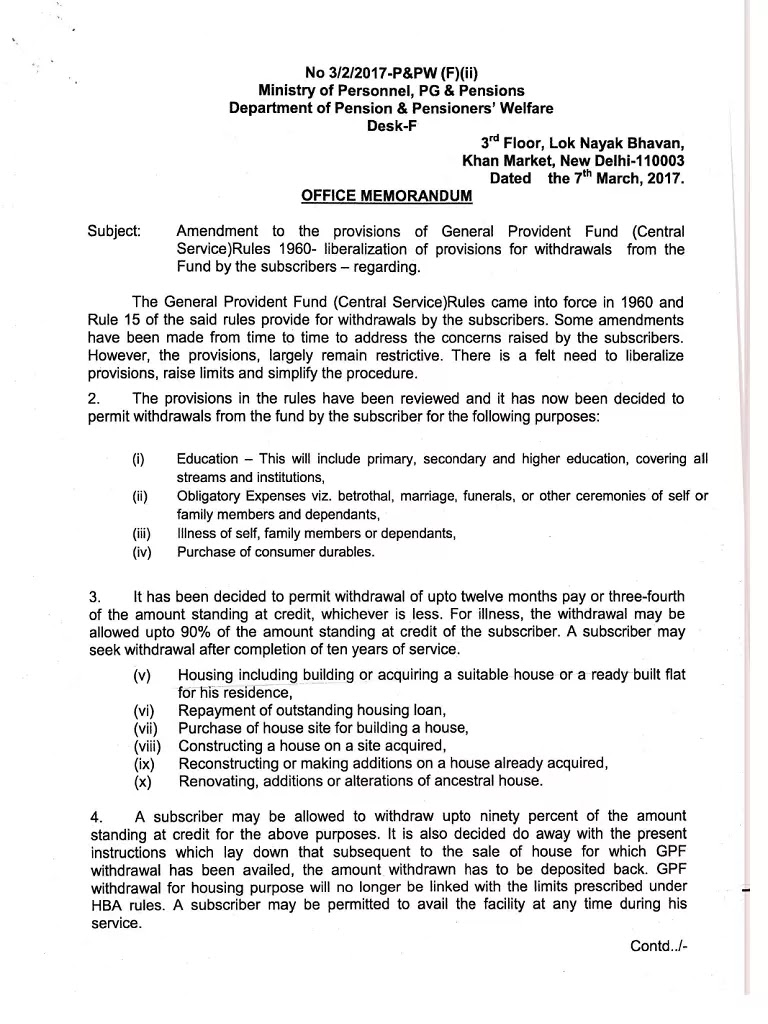 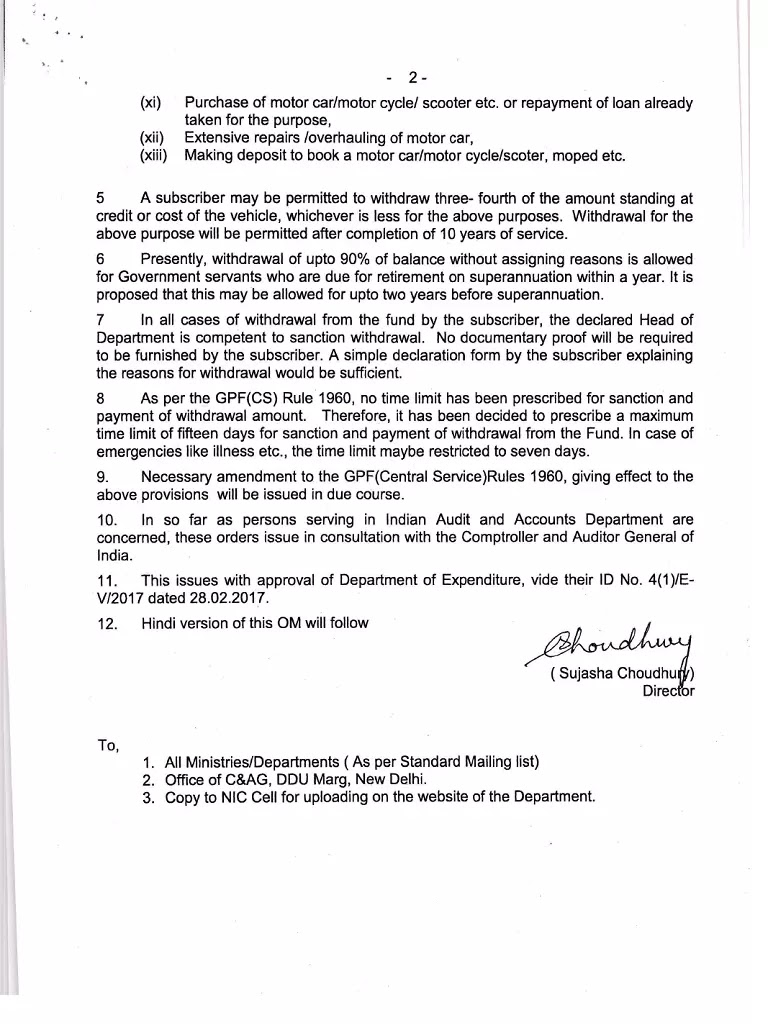