The undersigned is directed to invite attention to the guidelines issued by Controller General of Accounts, Ministry of Finance, Department of Expenditure, vide OM No.1(7)/2003/TA /Part file/279, dated 02.09.2008 for streamlining of procedure for remittances of contributions under the National Pension System (NPS) by PAOs/CDDOs and NCDDOs which provides, inter-alia, the detailed procedure for the purpose of crediting of the NPS contribution to the NPS Trustee Banks so as to ensure that the contribution is credited to the NPS regulatory system as per the timelines prescribed therein without delay.

2. Based on the recommendations of the 7th Central Pay Commission and the recommendations of a Committee of Secretaries, as set up in pursuance of the decision of the Government contained in para 15 of the Resolution of this Department bearing No. 1-2/2016-IC dt. 25.7.2016 to suggest measures for streamlining the implementation of the NPS, the Department of Financial Services, Ministry of Finance, has issued a Notification F. No. 1/3/2016-PR dt. 31.1.2019, clause 1(2)(x), 1(2)(xi) and 1(2)(xii) thereof provides as under:


(a) In all cases where the NPS contributions were deducted from the salary of the Government employee but the amount was not remitted to CRA system or was remitted late, the amount may be credited to the NPS account of the employee along with interest for the period from the date on which the deductions were made till the date the amount was credited to the NPS account of the employee, as per the rates applicable to GPF from time to time, compounded annually.

(b) In all cases where the NPS contributions were not deducted from the salary of the Government employee for any period during 2004-2012, the employee may be given an option to deposit the amount of employee contribution now. In case he opts to deposit the contributions now, the amount may be deposited in one lump sum or in monthly installments. The amount of installment may be deducted from the salary of the Government employee and deposited in his NPS account. The same may qualify for tax concessions under the Income Tax Act as applicable to the mandatory contributions of the employee.

4. While carrying out the above decision contained in the afore said notification dt 31.1.2019, it has to be ensured that the modalities for implementing the same are uniform across the pension accounting organizations and, therefore, for this purpose, the office of Controller General of Accounts of this Department shall be the nodal organization for laying down the modalities. Accordingly, the office of Controller General of Accounts shall issue guidelines for the purpose. The concerned Financial Advisor shall be the central point for the purpose in the respective Ministries/Departments.

5. It is likely that the concerned Ministries/Departments need data and information from the Central Recordkeeping Agency, namely, NSDL, to carry out the above decision in respect of employees under their administrative domain. In order, therefore , to facilitate such action by the Ministries/Departments, the CRA shall look into its record and in all cases which are covered under the decision contained in the aforesaid Notification dt. 31.1.2019, it shall pass on such employee-wise details, on its own, to the concerned Head of the Office and DDO/PAO, where the employee is currently posted within 15 days of the date of issue of these orders so that the desired and timely action gets initiated by the Ministries/Departments.

6. In their application to the employees working in the Indian Audit & Accounts Department, these orders issue in consultation with the Office of Comptroller & Auditor General of India. 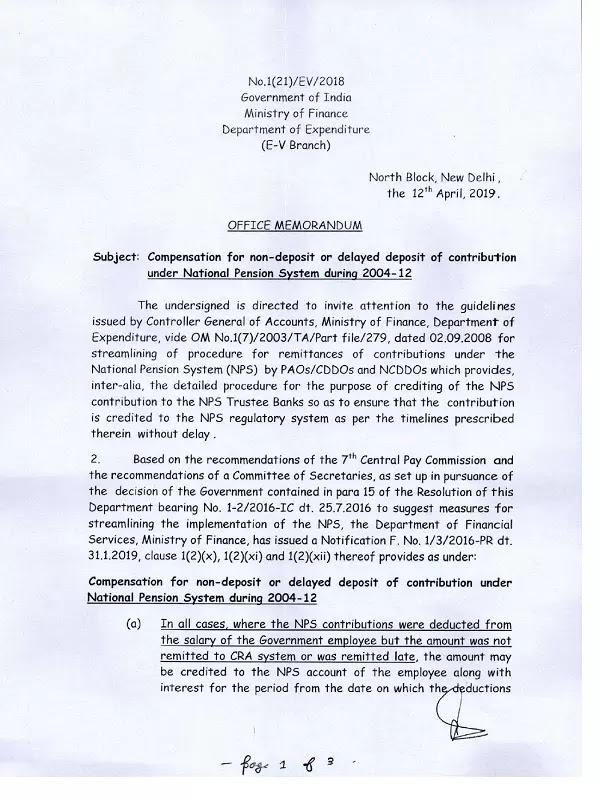 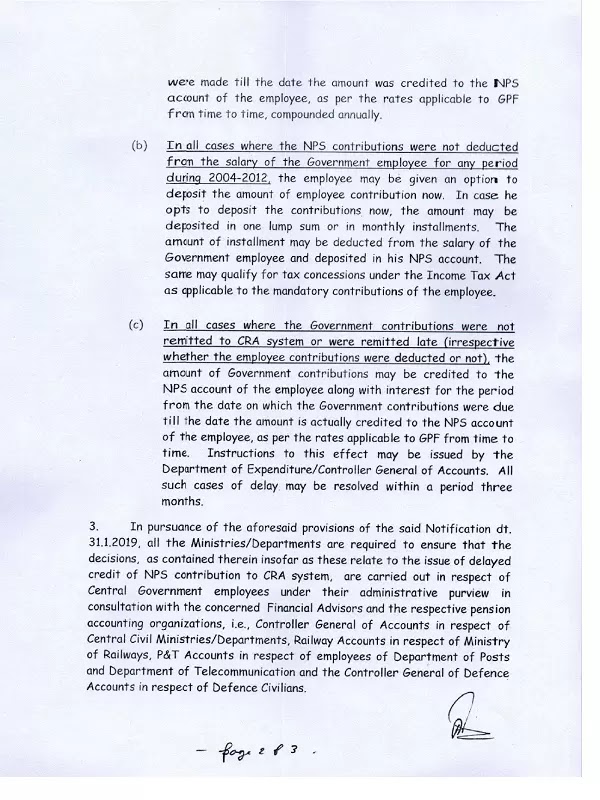 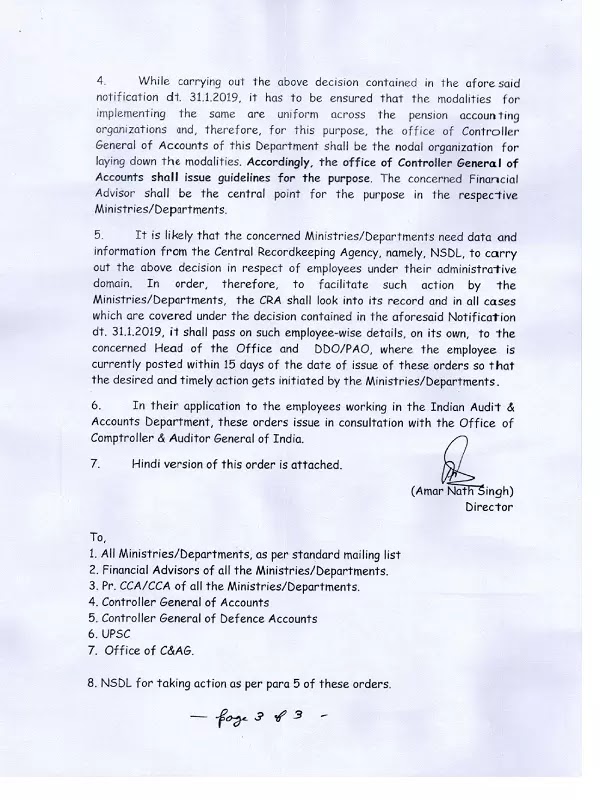