Subject: Giving effect to the Judgement(s)/Order(s) of Hon’ble Supreme Court on Aadhaar-PAN for filing return of income-regd.

As per clause (ii) of sub-section (1) of section 139AA of the Income-tax Act, 1961, with effect from 01.07.2017, every person who is eligible to obtain Aadhaar number has to quote the Aadhaar number in return of income.

3. In light of the aforesaid judgement(s)/order(s) of Hon’ble Supreme Court, from 01.04.2019 onwards, to give effect to the above judgements/orders, it has been decided by the Board that provision of clause (ii) of sub-section (1) of section 139AA of the Act would be implemented and it is mandatory to quote Aadhaar while filing the return of income unless specifically exempted as per any notification issued under sub-section (3) of section 139AA of the Act. Thus, returns being filed either electronically or manually cannot be filed without quoting the Aadhaar number.

4. Returns which were filed prior to 01.04.2019 without quoting of Aadhaar number as an outcome of any decision of different High Courts in a specific case or returns which were filed during the period when the online functionality for filing the return without quoting of Aadhaar number was so available in the aftermath of decision of Delhi High Court dated 24.07.18 in W.P. C.M 7444/2018 & C.M. Application No. 28499/2018 in case of Shreya Sen vs. Union of India & Ors., till it was withdrawn post decision of Constitution Bench of the Hon’ble Supreme Court dated 26.09.18, would also be taken up for processing without causing any adverse consequence for non-quoting of Aadhaar as per provision of section 139AA of the Act.
5. Hindi version to follow.
sd/-
(Rajarajeswar R.)
Under Secretary (ITA.II), CBDT
(F. No. 225/75/2019-ITA.II) 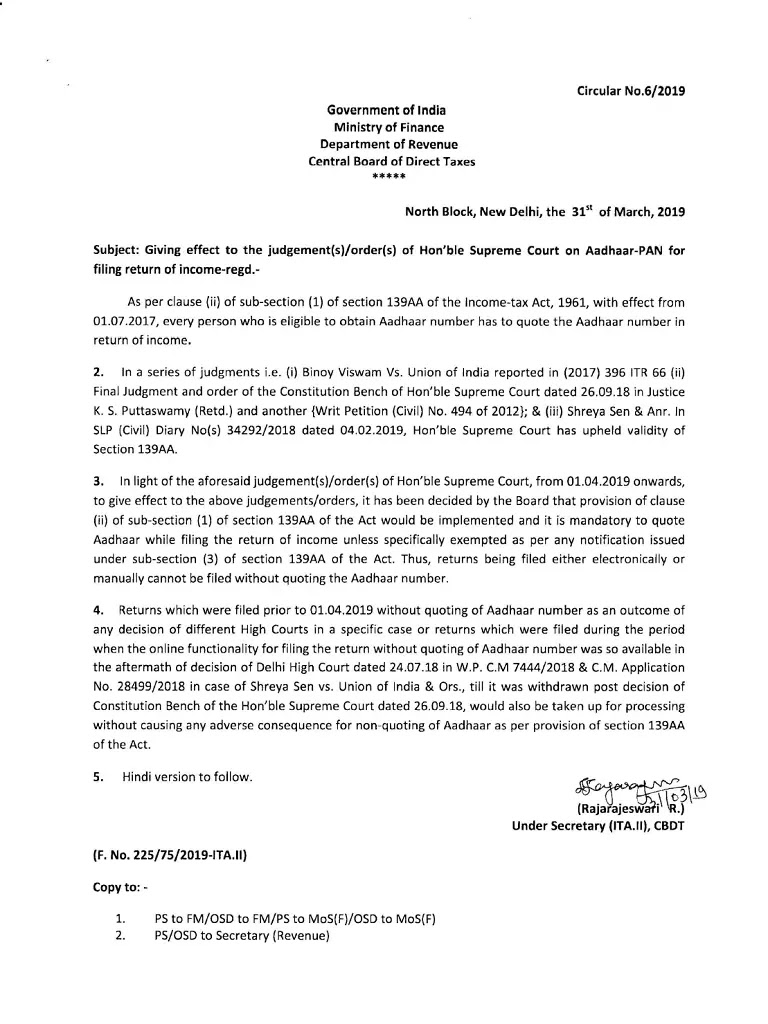 Copy to view/download the PDF
[https://www.incometaxindia.gov.in/communications/circular/circular_6-2019.pdf]