Sub : CCS(RP) Rules 2008-Section II of the Part ‘A’ of the First Schedule thereto-Entry Pay for direct recruits appointed on or after 01-01-2006 and pay fixation in the case of persons other than such direct recruits.

The above referred OM dated 28-9-2018 issued by Department of Expenditure, Ministry of Finance was circulated by OFB (Per/Policy Section) vide Circular No.01/6th CPC/Per/Policy dated 09.10.2018 and the operative portion (i.e Para 08) of the said OM is furnished here-under:-
“Accordingly, the President is pleased to decide that in respect of those posts where entry pay for direct recruits appointed on or after 1.1.2006, as per Section II of Part A of the First Schedule of CCS(RP) Rules, 2008, becomes applicable by virtue of the provision of the element of direct recruitment in the relevant recruitment rules, the pay of Central government employees who were appointed to such posts prior to 1.1.2006 and whose pay, as fixed in the revised pay structure under Rule 7 thereof as on 1.1.2006 turns out to be lower than the prescribed entry pay for direct recruits of that post, shall not be less than such entry pay w.e.f. 1.1.2006. Likewise, the pay of Central Government employees who were appointed to such posts by way of promotion on or after 1.1.2006 and whose pay, as fixed under Rule 13 of CCS(RP) Rules, 2008, happens to be lower than the said entry pay, shall also not be less than such entry pay from the date of their promotion taking place on or after 1.1.2006”
Further Column No.11 (the method of recruitment ) of the existing Recruitment Rules i.e SRO 185 of 1994 for the grades of Highly Skilled II & Highly Skilled I says:-
“By Promotion after adjustment of surplus and transfer failing which by direct recruitment”
Since the provision of direct recruitment is prescribed only under ‘failing which’ clause of SRO and no direct recruitment in the said grades has actually been made so far, PCA(Fys) was requested to offer comments /views on the admissibility of the benefit of entry pay for the IEs. In turn, PCA(Fys) referred the matter to CGDA, Delhi for clarification/guidelines.
Now, CGDA vide letter No.AT/II/2702/Clar-III dated 26-4-2019 (Copy Enclosed ) has clarified that the benefit of entry pay to direct recruits can also be extended to the IEs promoted to HS Gr.-II &HS Gr.-I on or after 01.01.2006.
In view of the above, all the Ordnance factories are requested to implement the MoF/DoE OM No.8-23/2017-E-IIA dated 29-9-2018 w.e.f 01.01.2006 for eligible Industrial Employees
sd/-
(H.K.Paikra)
Director/IR
For DGOF
Read also :  Ad-hoc Bonus for PBORs of the Armed Forces including JCOs in the Army, equivalent rank in Navy and Air Force : MoD Order.
ujj 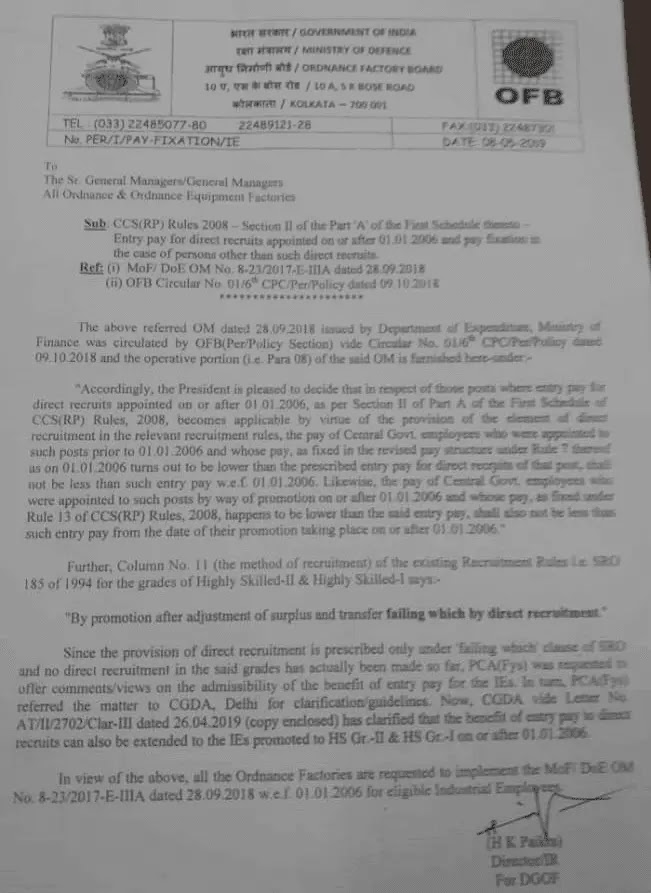 DEFENCE 59 OFB 1 Uncategorized 2198
Newer Post
Meeting with Staff Side, NC on Agenda Items pertaining to Ministry of Health & Family Welfare to be held on 16.05.2019
Older Post
Amendment in Recruitment Rules for Higher Selection Grade-I and Grade-II in Dept of Post