ECHS : Self attested certificate form for dependent above 18 years – to be submitted every year for unblocking of Smart Cards

Rashmi Prasad 0 May 8, 2019 1:23 am
ECHS : Self attested certificate form for dependent above 18
years – to be submitted every year for unblocking of Smart Cards
Appendix ‘B’
(Refer to Para 5 of CO,


ECHS SELF ATTESTED CERTIFICATE FOR

DEPENDENT ABOVE 18 YEARS OF AGE

(TO BE SUBMITTED ONLINE EVERY YEAR FOR UNBLOCKING OF CARDS)

whose photograph is appended is a bonafied dependent

(i) Copy of 26AS for the following Assessment Year :-

(a) This self declaration is valid for ONE Year from the
date of submission.
(b) The cards of all dependents above 18 years of age will be blocked every
year and needs to be activated through online submission of this proforma .
(c) In case of any change in dependency, the primary Card holder is
responsible to cancel the membership of dependent immediately on occurrence
by blocking the card on the online portal and intimation to his/ her
parent/ nearest polyclinic.

Any false declaration/ misuse of benefits will entail suspension/
cancellation of ECHS membership of all members.
I, __Name of Ex-servicemen (Autopopulated)__, do hereby solemnly
declare and verify that the contents of the above declaration are true
to the best of my knowledge and belief, and nothing material has been
concealed or suppressed therefrom. This electronic self declaration has
been given with reference to IT Act 2000 and is admissible under The
Indian Evidence Act 1872. 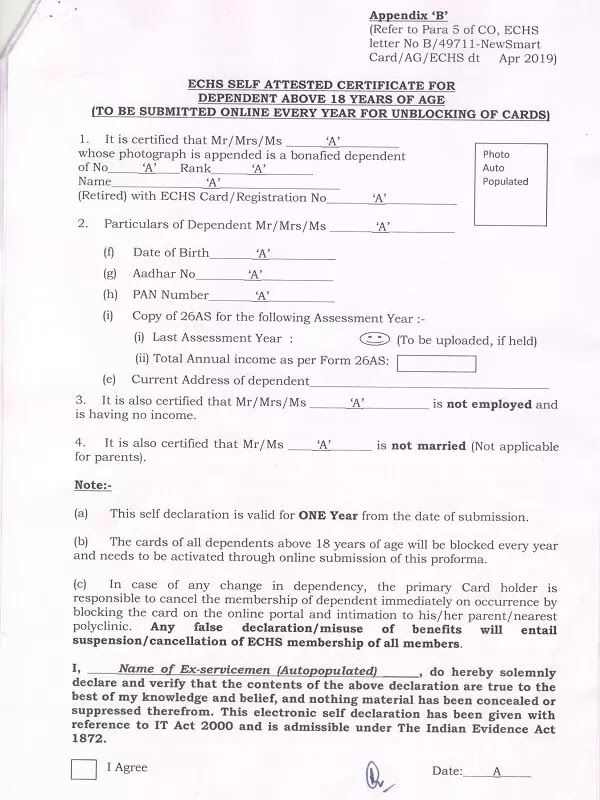 ECHS Smart Card: Self Attested Certificate From for Dependents – Submission at the time of collection of Card