Sir,
I am directed to refer to your letter No.SG/AIAIASP/03/2018 on the above
mentioned subject and to inform that the issue of granting NFSG in pre­
revised GP Rs. 5400/- in PB-2 corresponding to Level 9 to Asstt.
Superintendent Posts on completion of four years of service in the
pre-revised GP Rs. 4800/- (Level 8 in Pay Matrix) has been examined with
following observations:-
Read also :  DoP OM : Maternity Leave for the female Gramin Dak Sevaks (Female GDS)
i. The NFSG Scale is given to AAOs in P&T Accounts vide MoF OM No.
25-2/2017- IC/E.III (A) dated 18.06.2018 as per recommendations of 7th CPC
in Para 11.12.140 of the report whereas there is no such recommendation for
ASP cadre. Moreover, AAOs in P&T Accounts are having all India Transfer
Liability and on contrast, the ASP is a Circle level cadre. Further, ASPs
are enjoying Rule 38 transfer from one Circle to other whereas there is no
such provision for AAOs. As such, the plea for granting NSFG to ASP cadre
in line of AAO cadre as mentioned in the representation is not tenable.
Read also :  Gramin Dak Sevaks (Conduct and Engagement) Rules, 2020
ii. There is different time span in promoting IPs to ASPs in Circles as ASP
is a Circle level cadre. In some Circles IPs get promotion in ASPs cadre
immediately after completion of minimum qualifying years of service in IP
cadre viz 3 years (now 5 years) whereas in some Circles IPs are waiting
their hierarchical promotion in ASP cadre even after regular service of
10-13 years in the cadre. The NSFG Scale would not only make a huge
disparity in pay among ASPs who are originally entered in IP cadre on the
basis of same examination and are borne on the same IP gradation list.
Read also :  7th Pay Commission : Pension fixation on the basis of Option 1 recommended by 7th CPC – Representation
Therefore, the proposal to grant NSFG to Asstt. Superintendent Posts on
completion of four years of service cannot be recommended.
Yours sincerely,
sd/-
(SB Vyavahare)
Asstt.Director General (GDS/PCC) 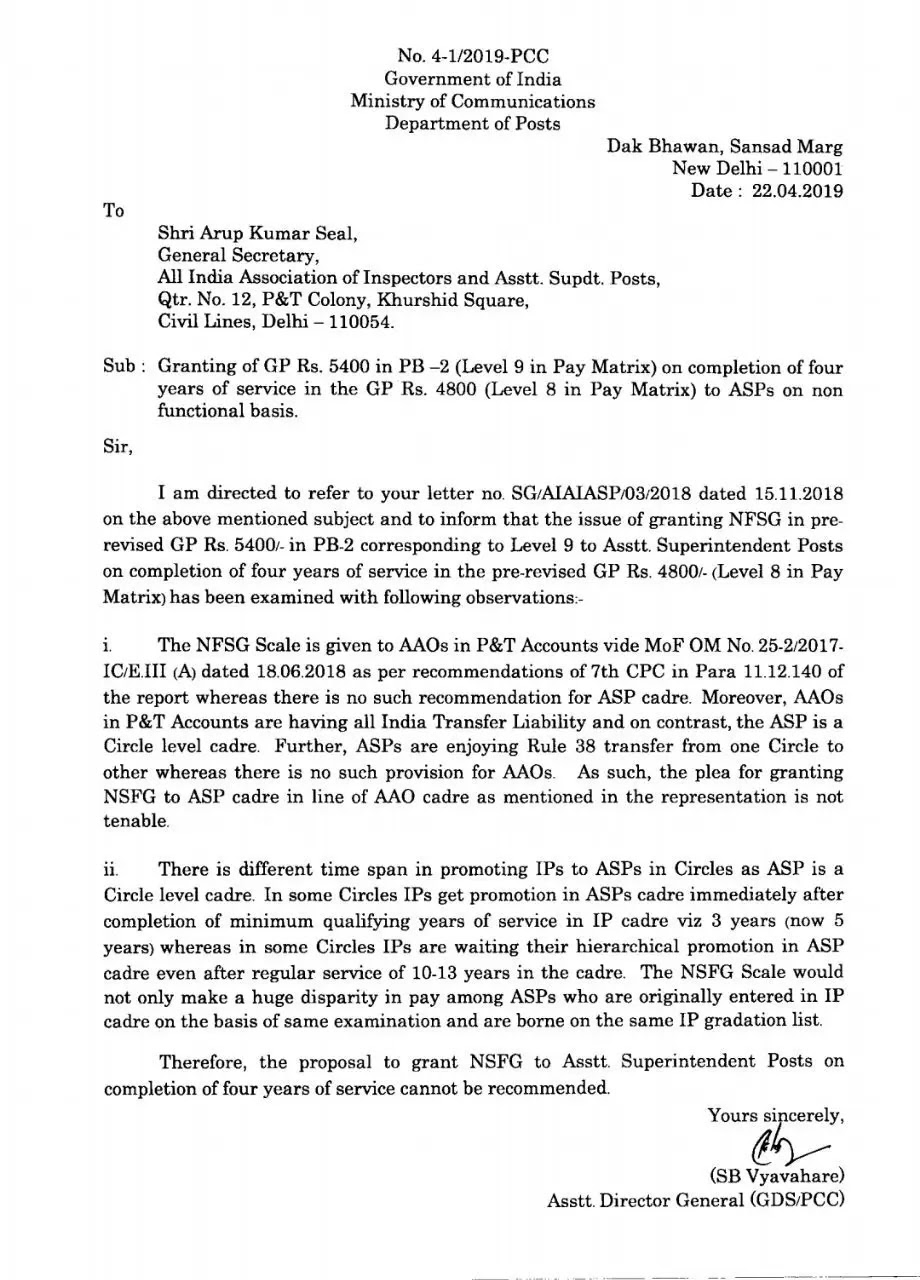 Department of Posts 147 Minsitry of Communications 50 Uncategorized 2198
Newer Post
DoPT: Relaxation and extension of timelines for recording of PAR for the year 2018-19 electronically due to engagement in ongoing General Elections duty
Older Post
Replacement of name of erstwhile DGS&D by GeM in GFRs 2017