1. There are three prayers in this writ petition – one is for a direction to the Respondents to grant the Petitioner the benefit of the first Assured Career Progression (‘ACP’) Scheme with effect from October, 1999, when the Petitioner had actually completed 12 years of service instead of 30th December, 2000. The second is that the benefit of the MACP should be granted with effect from October, 2007 (instead of 1’1 September, 2008), when the Petitioner completed 20 years of service. The third prayer is that the benefit of the MACP should be given by placing the Petitioner in the scale of Sub Inspector (‘SI’) i.e. Rs.5500-9000 (pre-revised).
Read also :  7CPC : Fixed Medical Allowance (FMA) to the CG Pensioners @ 1000/- p.m – DoP&PW Order
2. As far as the first prayer is concerned, the same has already been granted by the Respondents to the Petitioner. As far as the second prayer is concerned, the issue is covered in favour of the Petitioner by the judgment
dated 8th December, 2017 of the Supreme Court in Union of India v. Balbir Singh Turn (2018) I I SCC 99. The Supreme Court has in the above judgment clarified that the benefit of the MACP which was on the basis of the recommendations of the Sixth Central Pay Commission to be extended with effect from 1st January, 2006 and not from 1st September, 2008, as was directed by the Respondents.

3. As regards the fixing of the correct pay scale of the Petitioner, it is seen that in BSF/General Duty, there is no post of ASI/General Duty in the pay scale of Rs.4000-100-6000 (pre-revised) which had been converted into Pay Band-I i.e. 5200-20200 in the grade pay of Rs.2800 having pay band of 8560 with the total pay (basic pay) of Rs.11360. Thus, in the case of the Petitioner, the second financial upgradation was required to be given in the pay scale of Rs.5500-9000 (pre-revised). Since this was not granted to other similarly placed as the Petitioner, writ petitions were filed in this Court. A series of judgments have been passed by this Court in those writ petitions, as a result of which the Respondents extended the benefit of financial upgradation in the pay scale of Rs.5500-9000 to all personnel who had completed 24 years of regular service during the period 9th August, 1999 to 31st August, 2008.

4. The counter affidavit of the Respondents does not dispute the applicability of the judgment of the Supreme Court in Union of India v Balbir Singh Turn (supra) or the applicability of the other orders of this Court, including the order dated 18th December, 2015 in W.P.(C) No.11725 (Digamber Singh ASI v UOI) concerning the appropriate pay scale for the
purposes of grant of the MACP benefits.
5. Consequently, this Court directs as under:
6. The petition is disposed of in above terms. No costs.
S. MURALIDHAR, J.
I.S.MEHTA, J.
MAY 01, 2019ujj 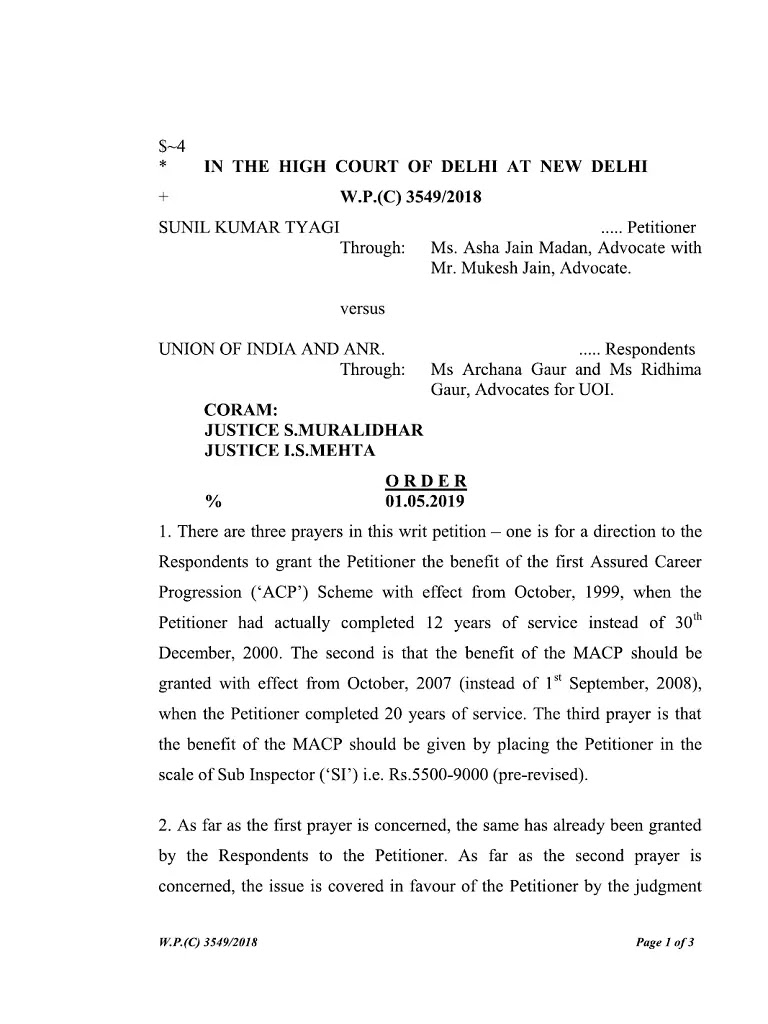 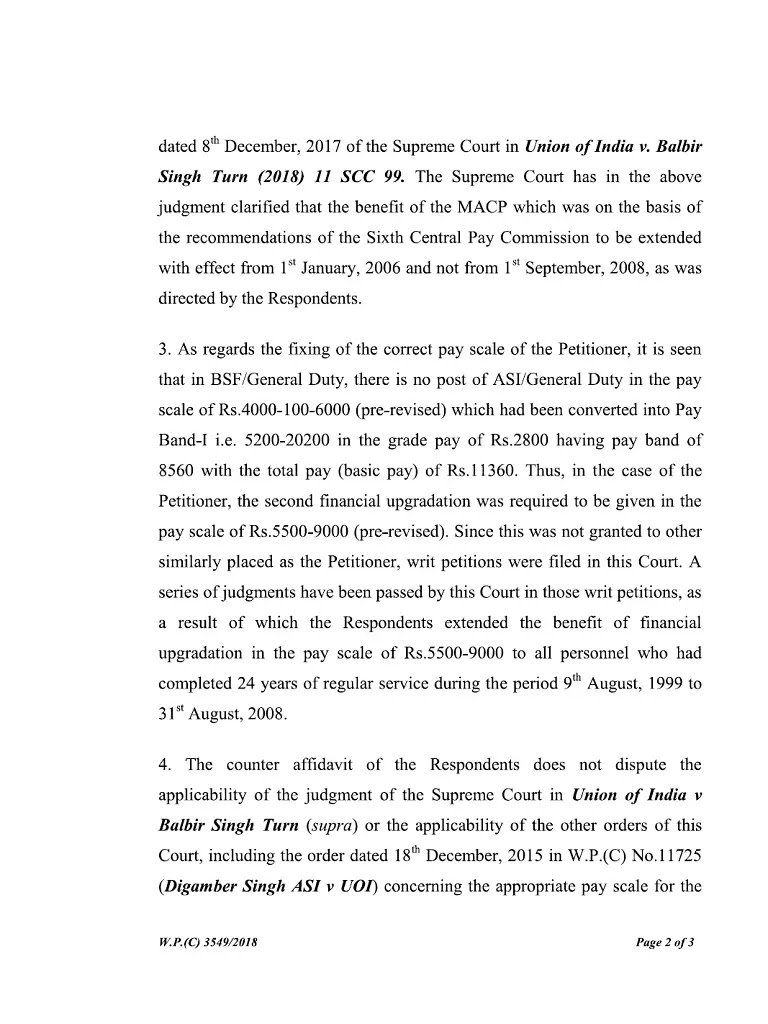 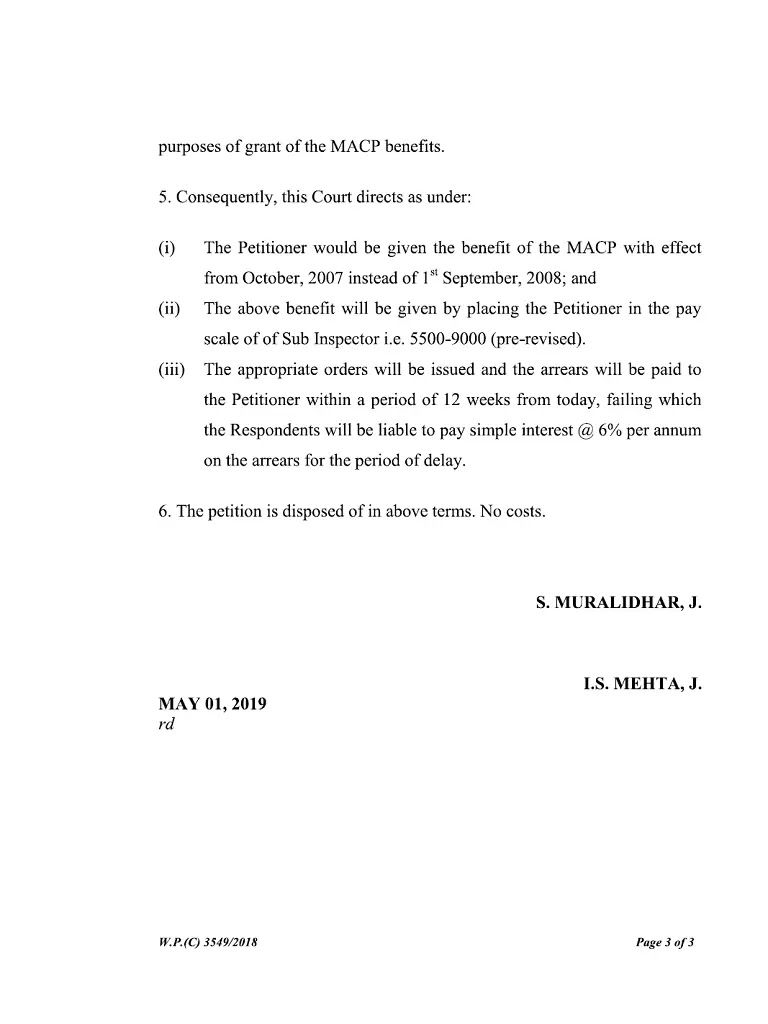 MACP 53 High Court 16 Uncategorized 2198
Newer Post
Procedure, Format and Standards for issuance of part B of Form No.16 through TRACES
Older Post
Meeting with Staff Side, NC on Agenda Items pertaining to Ministry of Health & Family Welfare to be held on 16.05.2019