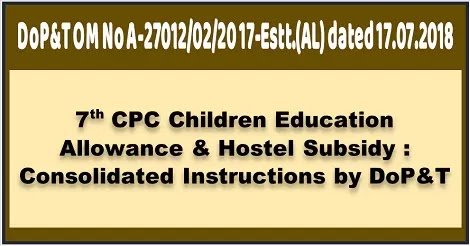 e) The above rates/ceiling would be automatically raised by 25% every time the Dearness Allowance on the revised pay structure goes up by 50%.

f) The Hostel Subsidy and Children Education Allowance can be claimed concurrently.

g) In case both the spouses are Government servants, only one of them can avail reimbursement under Children Education Allowance and Hostel Subsidy.

h) The reimbursement of CEA and Hostel Subsidy will be done just once in a financial year after completion of the financial year.

i) Hostel subsidy is applicable only in respect of the child studying in a residential educational institution located at least 50 kilometers from the residence of the Government Servant.

j) The reimbursement of Children Education Allowance and Hostel Subsidy
shall have no nexus with the performance of the child in his class. In other
words, even if a child fails in a particular class, the reimbursement of Children Education Allowance/Hostel Subsidy shall not be stopped. However, if the child is
admitted in the same class in another school. although the child has passed out of the same
class in previous school or in the mid-session. CEA shall not be reimbursable.

m) The upper age limit for Divyaang children has been set at 22 years. In the case of other children the age limit will be 20 years or till the time of passing 12th class whichever is earlier. There shall be no minimum age.

n) Reimbursement of CEA and Hostel Subsidy shall be applicable for children from class nursery to twelfth, including classes eleventh and twelfth held by Junior Colleges or schools affiliated to Universities or Boards of Education.

o) CEA is allowed in case of children studying through “Correspondence or Distance Learning” subject to other conditions laid down herein.

p) The CEA and Hostel Subsidy is admissible in respect of children studying from two classes before class one to 12th standard and also for the initial two years of a diploma/certificate course from Polytechnic/ITI/Engineering College, if the child pursues the course after passing 10th standard and the Government servant has not been granted CEA/Hostel Subsidy in respect of the child for studies in 11th and 12th standards.

r) In case of a Divyaang child studying in an institution i.e. aided or approved by the Central/State Govt. or UT Administration or whose fees are approved by any of these authorities, the Children Education Allowance paid by the Govt. servant shall be reimbursed irrespective of whether the institution is ‘recognized’ or not. In such cases the benefits will be admissible till the child attains the age of 22 years.
s) The CEA is payable for the children of all Central Government employees including citizens of Nepal and Bhutan, who are employees of Government of India, and whose children are studying in the native place. However, a certificate may be obtained from the concerned Indian Mission that the school is recognized by the educational authority having jurisdiction over the area where the institution is situated.
t) The Children Education Allowance or hostel subsidy shall be admissible to a Govt. servant while he/she is on duty or is under suspension or is on leave (including extra ordinary leave). Provided that during any period which is treated as ‘dies non’ the Govt. servant shall not be eligible for the CEA/Hostel subsidy for that period.
3. These above instructions would come into effect from 1st July, 2017.
Hindi version follows.
(Sandeep Saxena)

Under Secretary to the Government of India

To
1. Ministries/Departments of the Government of India.
2. NIC with a request to upload the OM on the website of DoPT.
Signed pdf
[http://documents.doptcirculars.nic.in/D2/D02est/CEA%20OMwVQXm.pdf]